Dr. Cecil Holland has been appointed Interim Associate Dean for the Division of Nursing. He came to Winston-Salem State University in 2004 and is currently an associate professor. During his time at WSSU, he has served in various leadership capacities, including Assistant Dean for Admissions, Student Affairs and Program Effectiveness and Interim Assistant Dean for Curriculum and Instruction. 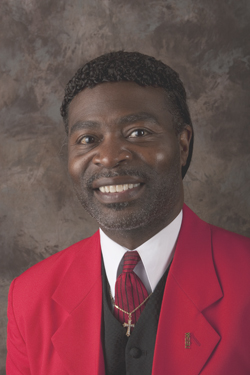 As a noted clinician and academician with more than 34 years of experience, Holland has practiced medical-surgical, critical care and gerontological nursing during the span of his nursing career. Holland has facilitated the education and training of healthcare professionals in a number of venues and promoted excellent patient care through his service.

He received his baccalaureate degree and Masters of Science in Nursing degree as a Family Nurse Practitioner from WSSU. Holland also received the Masters of Science in Adult Education degree from North Carolina Agricultural and Technical State University in Greensboro, N.C., the Doctor of Education in Higher Education and Leadership specializing in Healthcare Education from Nova Southeastern University, Ft. Lauderdale, Fla., and the Doctor of Philosophy in Health Care Administration from Breyer State University in Ala. Holland’s research interests include cardiovascular health, childhood obesity, and interprofessional collaboration.

Holland serves on numerous community boards, has received over $500,000 in extramural funding, has been published in several peer reviewed journals and magazines, and has presented at national conferences.

His community service has included membership on several boards, including The Shepherd Center of Winston-Salem, UFit2 Inc., SECU Hospitality House, and St. Stephen Missionary Baptist Church. Additionally, he chaired the Congregational Nurse Health Ministry Council of the Shepherd Center. He has served in leadership positions in national organizations, including as vice president of the Rho Lambda Chapter of Sigma Theta Tau International Honor Society of Nursing. He is currently on the Executive Board of Rho Lambda and serves as treasurer. He is a member of the Forsyth Technical Community College Nursing Advisory Board and the WSSU School of Health Sciences Advisory Board.