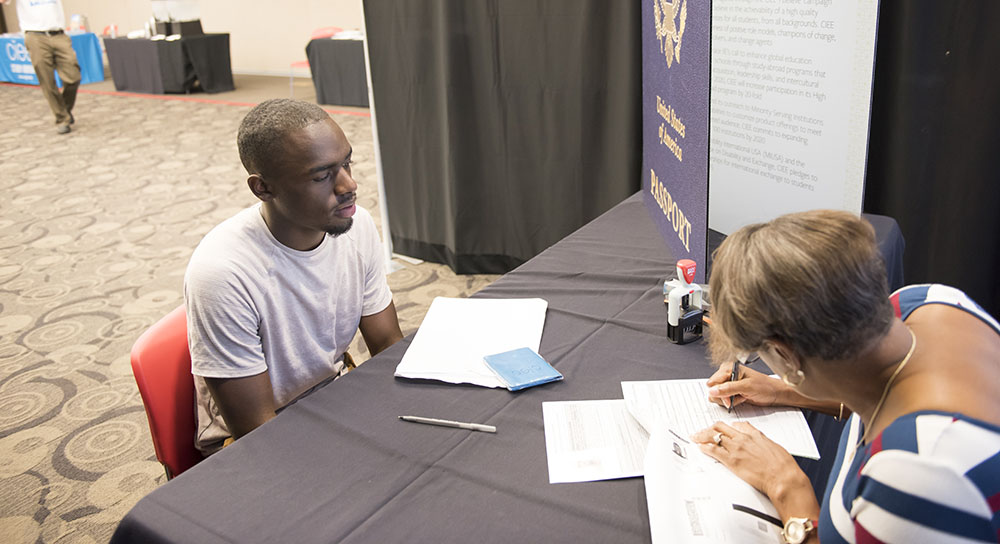 Je’Rel Smith, a WSSU junior, is one step closer to his dream: a spring break trip to Brazil.

Smith, a mass communications and marketing major from Lexington, benefited from a program from the Council on International Educational Exchange (CIEE), which provided U.S. passport applications fees for 100 WSSU students.

Checks to cover the cost of passport applications were distributed to students by CIEE as part of its Passport Caravan initiative on Tuesday, Oct. 18. The campus sponsors for the event were the Office of International Programs and the WSSU Passport Acceptance Agency.

“For students to remain competitive in the world today, it’s important for them to have a global perspective. The opportunity to study abroad is an important way for students to gain this perspective,” says Joti Sekhon, director of international programs at WSSU. “Coming up with the money to pay for a U.S. passport can be a barrier for many of our students. We appreciate CIEE’s support for WSSU’s students, helping to remove this initial barrier.”

As part of the event, CIEE also offered information about study abroad opportunities and provided scholarships for passport recipients who study abroad on a CIEE program.

This event is part of CIEE’s support of Generation Study Abroad, an initiative to make study abroad possible for more U.S. students by breaking down the three major barriers to study abroad: cost, curriculum and culture. Over the next five years, CIEE is sponsoring passports for 10,000 students around the country, providing $20 million in scholarships and making an annual grant to college faculty to support innovative approaches for custom study abroad programs. The goal of Generation Study Abroad is to double the number of American students who study abroad by 2020.

All WSSU freshmen through juniors who were requesting a passport for the first time were eligible.

Over the past five years, there has been a 40 percent increase in the number of WSSU students studying abroad. The top emerging destinations are Brazil, Kenya and China. As part of the new WSSU five-year Strategic Plan, a priority is to develop signature international education programs and partnerships centering on Africa, the Americas and Asia, with a focus on developing programs in Cuba, the Caribbean, India, and Sub-Saharan Africa in addition to expanding existing programs, Sekhon says.

WSSU offers a number of resources for students who desire to study abroad, including:

Nationwide, only about 1 percent of all students enrolled in higher-education study abroad, according the Institute of International Education (IIE). African Americans are underrepresented, constituting only about 5 percent of the students who study abroad.

Smith, who has traveled as far as California, says studying abroad will make him more marketable to potential employers when he graduates.

“This will definitely help me stand out amongst my peers,” he says.