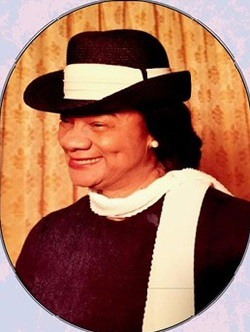 At the age of 105, Alma Setzer Keen had seen and done a lot before she passed on Dec. 15, 2016. She had been a highly respected educator, trailblazing community activist and administrator.

Born in Winston-Salem in 1911, she was one of the oldest alumnae of Winston-Salem State University and a longtime supporter. When she graduated from WSSU (then known as Winston-Salem Teachers College) in 1939, the university had only 550 students and 22 teachers. It only offered one bachelor’s degree at that time – in education.

She earned a master’s degree from Columbia University in New York in 1948.

She taught in the Winston-Salem/Forsyth County school system from 1939 to 1979. She started working at Kimberley Park Elementary, but spent most of her teaching years at Paisley, now Paisley IB Magnet School, once one of Forsyth County’s four all-black high schools.

She retired from Wiley Junior High, now Wiley Magnet Middle. She was primarily an art teacher, but took the opportunity to expose her students to far more disciplines that included English, literature, and the reciting of poems.

She also served as a trailblazing community and political activist.

She was the first African American and first woman appointed to the Winston-Salem Housing Authority Board of Commissioners. In 1960, Keen was invited by then-Sen. John F. Kennedy to serve on a committee of 400 women designated to plan the last seven days of his presidential campaign. Also, she was among President Lyndon B. Johnson’s guests at his inauguration.

For years, Keen was a neighbor to the late Clarence Edward “Big House” Gaines Sr. and his family on a street that was named after the legendary WSSU men’s basketball coach in Winston-Salem, but lived out her remaining years as a resident at Trinity Elms in Clemmons.

With her sister Juanita, Keen established a memorial scholarship fund at Winston-Salem State University to honor their parents.

Whereas, Ms. Alma Keen contributed greatly to our community as one of the eldest alumnae of Winston-Salem Teachers’ College, now Winston-Salem State University; and

Whereas, Ms. Keen dedicated her life to service as an arts educator, member of First Baptist Church, and chair of the Housing Authority of Winston-Salem’s Board of Directors; and

Whereas, Ms. Keen lived in such a manner to touch each and every one of us with her powerful example of leadership, love, and acceptance;

Let it be resolved, that we cannot replace Alma Keen but we will attempt to follow her example to improve our lives and our community.