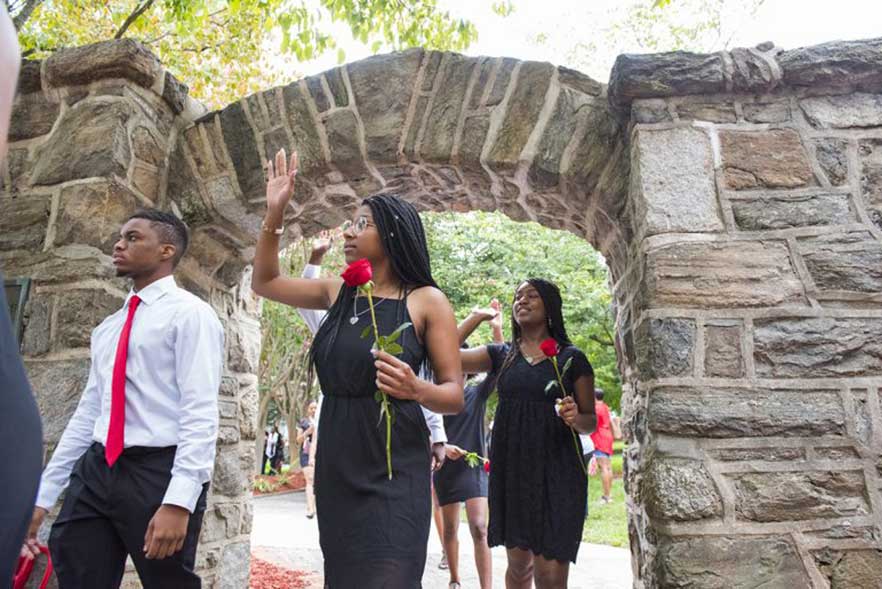 First-time Winston-Salem State University students participate in Through the Archway, a rite of passage ceremony at the conclusion their weeklong student orientation

Technology provider CollegeNET has recognized Winston-Salem State University (WSSU) for its commitment to advancing the economic opportunity of its students, naming the university a “Social Mobility Innovator.”

“It’s inspiring that Winston-Salem State is providing educational opportunity to promising students regardless of their economic background,” says Jim Wolfston, CEO of CollegeNET. “Winston-Salem State’s civic contribution is key given that higher education’s role in advancing economic mobility and the American Dream is rapidly deteriorating. Indeed, our nation is now caught in a damaging ‘tri-imperfecta.’ Tuitions are increasing, economic inclusion is declining on campuses and Pell Grants – intended for disadvantaged students with financial need – are being awarded more generously to richer families. Winston-Salem State’s innovation provides a strong example for how we can reverse these trends.”

The honor was announced in a release on Wednesday, Feb. 8. WSSU is only the third university to be recognized.

WSSU Chancellor Elwood L. Robinson says a key factor in WSSU’s success is its strong culture of engagement for students.

“What pleases me most about this recognition is that it is based on what’s most important to me as Chancellor: the outcomes,” he says. “We are providing our students with an education of the highest quality that transforms, not only our students and their families but our communities.”

This is one of several data-driven studies where WSSU has excelled. In January, The Equality of Opportunity Project released data that found WSSU was no. 2 in North Carolina –  among 101 four-year colleges – for promoting upward economic mobility.