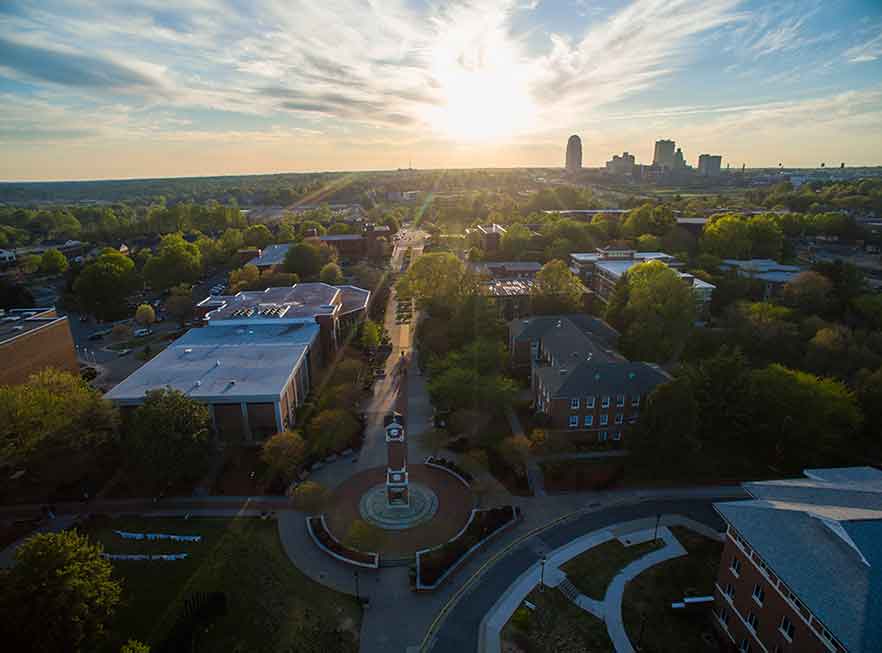 WSSU's campus with the Winston-Salem skyline in the background. (2016 file photo)

Winston-Salem State University (WSSU) has been selected by the Foundation for Student Success (FSS) to mentor three universities seeking to improve equity gaps among their Black, Latino, and American Indian students.

WSSU is one of seven participating in the mentorship program; each mentor institution is paired with three mentees. WSSU will provide guidance and support to Savannah State University, Langston University, and University of Michigan-Flint.

Staff from those universities will visit WSSU in April to start the process of understanding how WSSU managed its journey of institutional transformation that resulted in better success for students. Mentorship will continue through 2017 and into 2018 with periodic conference calls and consultations as the mentee schools draft equity plans. The first visit to campus will take place the week of April 17.

“Equity has become a defining quality of the policies and practices that we have developed at WSSU,” said Provost Brenda Allen. “We have taken many steps over the past decade to improve graduation rates, retention rates, and student outcomes. This is a great opportunity for us to share some of the best practices we have discovered.”

Over the course of the two-year project, case studies will be developed highlighting the activities that resulted in increased success for targeted students. In 2018, the mentor and mentee institutions will be featured in webinars on student success for the general higher education community.

WSSU’s trend of improved outcomes for its students has put it on the national radar. In February, WSSU was selected as a CollegeNET Social Mobility Innovator in recognition of its strong culture of engagement for students. The university’s one-week orientation for first-year students includes mentoring, advising, and social and cultural activities designed to introduce students to college life and prepare them for rigorous academics. As part of orientation, students are introduced to a state-of-the-art Student Success Center, which offers advising, tutoring, and career counseling under one roof.

Thanks to these and other measures, WSSU ranks first among all 17 University of North Carolina campuses with 79 percent of its students employed six months after graduation. First-year retention rates have risen from 68 percent in 2006 to 76 percent in 2015. Meanwhile, the six-year graduation rate has risen from 31.7 percent for the cohort entering in 2006 to 41.2 percent for the cohort entering in 2011. Further, by ensuring that curriculum has a clear path and by providing robust advising, the university has reduced the average number of credit hours a student attempts from 137 to 128 since 2013.

“We are on a great trajectory,” Allen said. “I’m hopeful that our success stories help our fellow educators achieve the same great results for their student populations.”

About the Foundation for Student Success

FSS was founded in 2016 and is housed at the National Center for Higher Education Management Systems (NCHEMS) in Boulder, Colorado. The mission of FSS is to stimulate and support the use of predictive analytics and other emerging technologies to help institutions of higher education identify at-risk students and to develop interventions to increase their chances of success. To accomplish the mission of FSS, the Board has targeted three student populations: Black, Latino, and American Indian. The data FSS and NCHEMS gathered and analyzed on the success rates for these students indicates serious equity gaps across the country.