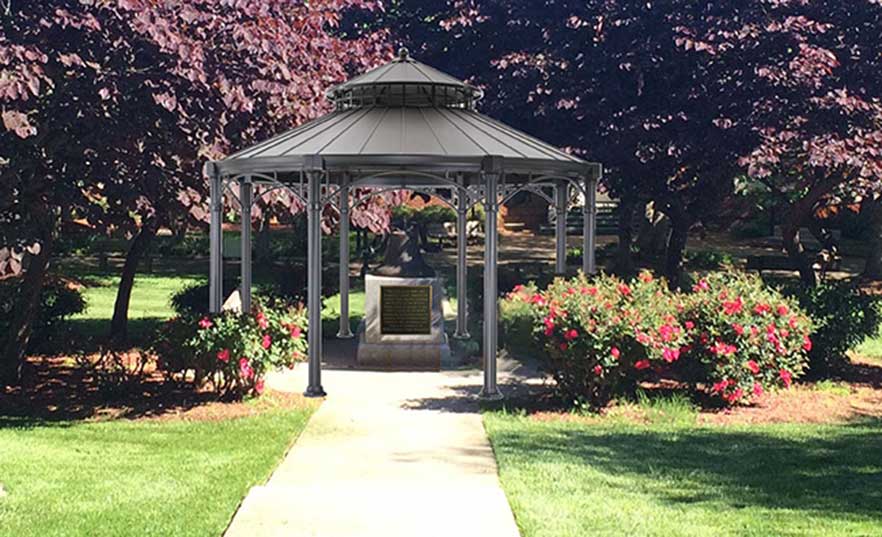 A rendering shows the gazebo that will be added as part of WSSU’s $30,000 Retool Your School grant.

The grant will support improvements to the historic lawn between Blair and Carolina halls.

WSSU qualified for the grant by receiving more than 100,000 online votes and social media posts  during a monthlong contest that closed on April 16. The initiative was led by WSSU’s Students Government Association.

The grant will pay for the materials to build a gazebo around the historic bell, which dates to 1900, as well as new park benches and landscape enhancements. According to the proposal, the improvements will create a new quiet space for students while honoring the university’s unique history. The gazebo will also help to protect the bell, which dates back to when WSSU was Slater Industrial and State Normal School.

In April, SGA launched a Zen Zone in the area  that will include hammocks. Students also will be able to check out, using their RAMCards, yoga mats and picnic blankets. This will create a green place where students can relax and “be free of cultural norms and judgment,” according to SGA President Mona Zahir.

WSSU was announced as a winner at a celebration at the Home Depot headquarters in Atlanta on Wednesday, May 10.

The proposal was developed by students from WSSU’s SGA in collaboration with WSSU’s Facilities Design and Construction. As part of the effort, which is being coordinated by WSSU’s Special Projects Unit, the bell will be restored with a weather-resistant coating.

The Home Depot Retool Your School Grant Program, established in 2010, encourages and recognizes innovative projects that contribute to the campuses of accredited Historically Black Colleges and Universities (HBCUs). Since the program’s inception, over $1.5 million in grant money has been awarded to our nation’s HBCUs to make sustainable improvements.

WSSU is the only North Carolina HBCU to win the grant this year.

For 125 years, Winston-Salem State University has fostered the creative thinking, analytical problem-solving, and depth of character needed to transform the world. Rooted in liberal education, WSSU’s curriculum prepares students to be thought leaders who have the skills and knowledge needed to develop innovative solutions to complex problems. WSSU is a historically Black constituent institution of the University of North Carolina with a rich tradition of contributing to the social, cultural, intellectual, and economic growth of North Carolina, the region and beyond. Guided by the motto, “Enter to Learn. Depart to Serve,” WSSU develops leaders who advance social justice by serving the world with compassion and commitment. Join us in celebrating our 125th anniversary with events throughout 2017. Learn more at www.wssu.edu/125th.