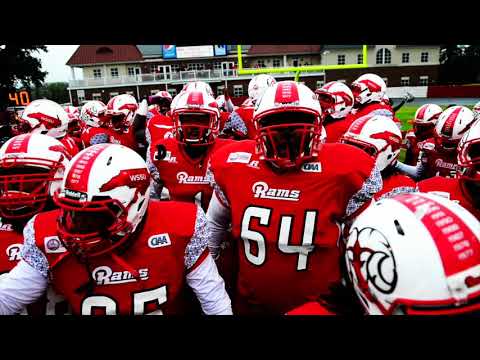 “This speaks to the work we’ve been doing to tell the WSSU story,” said WSSU Chancellor Elwood L. Robinson. “Building upon our legacy, the new logo makes a bold statement about who we are. There is no other Ram like it. It is as distinct as our university and truly reflects the WSSU Experience."

The new logo – which will be used by the university’s athletics programs, on gear and as décor across campus – was unveiled after nearly a year of surveys and focus groups of students, alumni, coaches and administrators, said Jaime Hunt, the university’s chief communications officer.

“The development of the new Ram head was truly a collaborative effort,” Hunt said. “We are so thrilled with the final product.”

WSSU engaged with Winston-Salem-based design firm One Hero Creative to create the logo. The new logo is seen as a spirit mark that can be used by departments across the campus to reflect Ram pride.

The Rams logo was unveiled at the conclusion of Meet the Rams, an event kicking off the fall athletics season. The new logo soon will begin showing up on a billboard, on campuswide signage and on the field at Bowman Gray Stadium. The event also was streamed through YouTube Live.

“Our fans are excited,” said Director of Athletics Tonia Walker. “The new logo shows that Rams are fierce competitors and a force to be reckoned with.”

WSSU students after the event agreed with Walker.

Xavier Quick, a running back on the football team, said: “It has more attitude, and that’s what we’re trying to bring to this season.

After Meet the Rams, WSSU’s bookstore rolled out all new Ram gear for fans. Gear will be available on the online store starting on Sunday.

Fall sports at WSSU get underway at home with women’s volleyball on Sept. 8. WSSU football’s home opener – a rematch of the 2016 CIAA Championship against Bowie State – is on Sept. 9, a game that will be streamed live on ESPN3.

The new Ram logo comes a little more than a year after the introduction of a new institutional logo and refreshed brand.

About the New Ram

The new logo, which features WSSU’s red and white, draws on previous iterations of the Ram to create a more modern take that conveys courage, spirit, tenacity and pride. The new spirit mark has been designed to work well for print and digital applications.

The Ram has been the mascot of Winston-Salem State since 1932. According to accounts, Theodore Hayes, a basketball player on the first collegiate team of any kind at the university, came up with the name. In 1978, Amon – inspired by the West African deity – was chosen as mascot’s name. WSSU’s previous Ram dates back to the mid-1990s and was designed primarily for use in print.

For 125 years, Winston-Salem State University has fostered the creative thinking, analytical problem-solving, and depth of character needed to transform the world. Rooted in liberal education, WSSU’s curriculum prepares students to be thought leaders who have the skills and knowledge needed to develop innovative solutions to complex problems. WSSU is a historically Black constituent institution of the University of North Carolina with a rich tradition of contributing to the social, cultural, intellectual, and economic growth of North Carolina, the region and beyond. Guided by the motto, “Enter to Learn. Depart to Serve,” WSSU develops leaders who advance social justice by serving the world with compassion and commitment. Join us in celebrating our 125th anniversary with events throughout 2017. Learn more by visiting WSSU's 125th Anniversary website.