WSSU's Board of Trustees and administrators, joined by city and state elected officials, break ground on the new sciences building.

“We’ve been waiting for this building for a very long time,” said Elwood L. Robinson, WSSU’s chancellor. “I know many of our science faculty have been waiting for it, and they are elated and delighted because they know that it will set a new standard for science, give our students an opportunity to have wonderful experiences in the laboratory, give our professors an opportunity to have state-of the-art facilities where they can continue to do their research. So, this is a very special day for us.”

The building, one of the first funded through the NC Connect Bond approved by voters last year, was first conceived in 2006.

“Having this wonderful new facility will help to contribute to the growth of our economy,” said Winston-Salem Mayor Allen Joines. “We’re betting on science and technology as a key part of the growth of our economy. We see an opportunity to create jobs. We are trying to create an entrepreneur ecosystem here in our community and having graduates that would come out of Winston-Salem State University would help us to fuel that and drive that.”

The building is part of more than $100 million in new construction planned at WSSU, which includes a $25 million residence hall that is expected scheduled to open in August 2018.

WSSU ranks as one of the top 50 producers of bachelor’s degrees in the nation for African Americans in physical science.

The ceremony is one of several events planned this month as WSSU celebrates its 125th anniversary. Events include an original performance production, “I Dream a World,” on Sept. 28, the day WSSU was founded in 1892. More information at www.wssu.edu/125th.

More photos from the ceremony are available on WSSU's Flickr page. 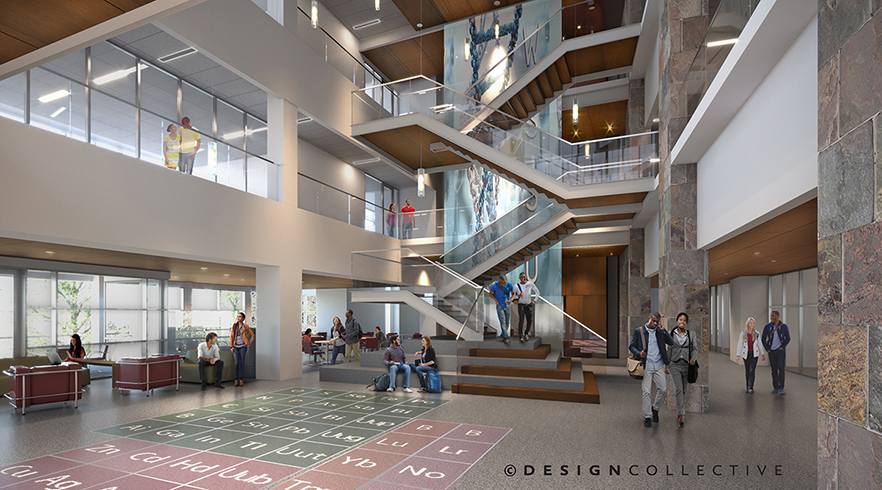 One features of the new sciences building is a multistory atrium.
Tags: 125th, Campus Life, Media, Faculty-Staff, The College, Alumni