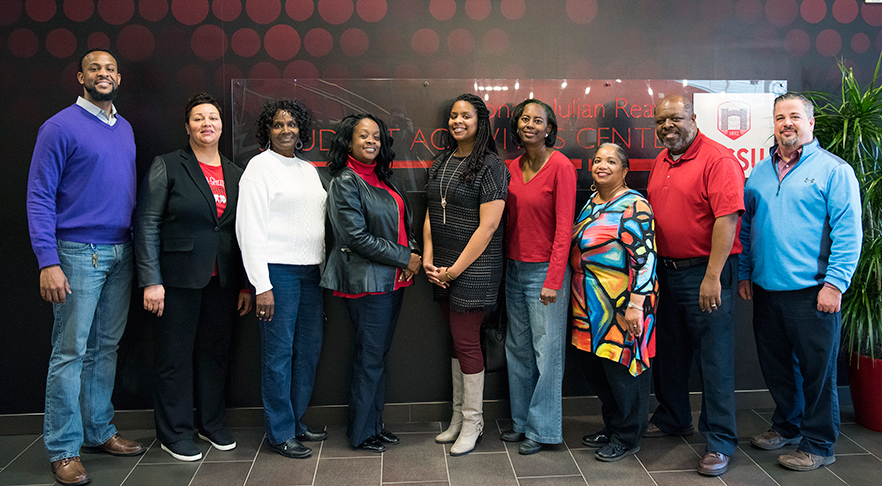 Staff from the Office of Human Resources, along with members of the SECC Committee, celebrate during a pizza party on Jan. 26. HR had 100 percent participation in the 2017 giving campaign.

The campaign, which ran Oct. 31-Dec. 8, reached its participation goal, with 18 percent of full-time employees participating, an increase from the previous year’s campaign. The campaign also surpassed its  monetary goal.

Leslie Winbush, WSSU SECC committee chair, said the support of building captains and other volunteers was crucial to the effort.

“We are extremely satisfied with this year’s campaign,” Winbush said. “Once again, Winston-Salem State University has shown that it cares about the community in which it lives. The legacy of caring and sharing continues and will serve as an example in the years ahead.”

Prizes were awarded throughout the campaign. Weekly winners were: Anastasia Polk-Bethea, Beth Day-Hairston, Ivy Caryel and Alan Ireland. Human Resources, which had 100 percent participation in the campaign, was awarded a pizza party celebration.

SECC allows state employees to donate to nearly 1,000 charities, including the WSSU Foundation. Since 1985, more than $103 million has been donated to local, national and global charities through SECC. For more information on SECC, please visit ncsecc.org.