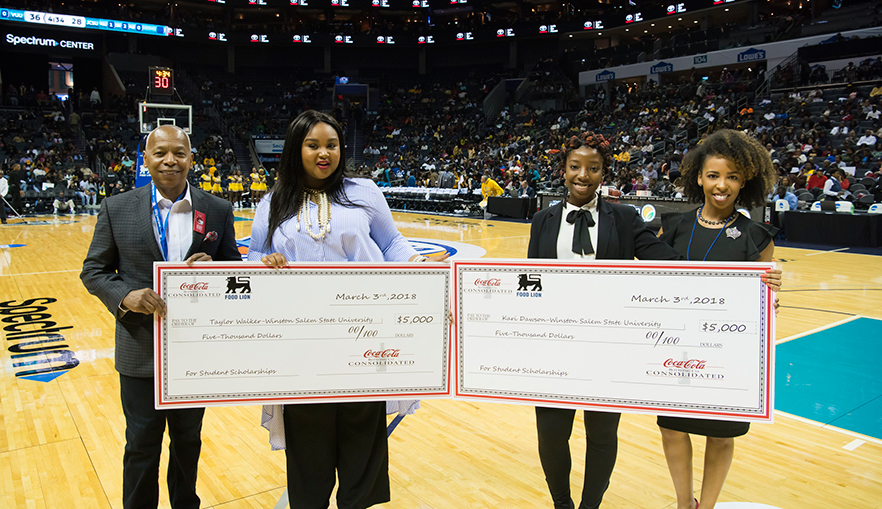 Five Winston-Salem State University students have received a total of $13,000 in scholarships through a CIAA essay contest.

Kari Dawson, a senior biology major from Mebane, and Taylor Walker, a sophomore mass communications major from Durham, were each awarded a $5,000 scholarship as two of four grand prize winners in the CIAA Essay Contest presented by Coca-Cola and Food Lion.

Dawson and Walker also received hotel accommodations, travel expenses and game tickets to the CIAA Tournament. They were presented the scholarships during halftime of the men's championship game on March 3.

In addition, three WSSU students were first-place winners and received $1,000 scholarships: Nadaja Womack, a junior from Greensboro; Christina Mason, a sophomore from Charlotte; and Amber Raiford, a senior from Raleigh.

"Food Lion’s partnership with the CIAA is a strategic alliance that supports our commitment to education and Diversity & Inclusion, said Garland Scarboro, Diversity & Inclusion Manager. "Food Lion's ongoing partnership with the CIAA and Coca-Cola, has helped us to provide scholarship opportunities and recruit top, diverse talent. Together, we are touching the lives of our future."

“Coca-Cola Consolidated has a strong commitment to the education and youth empowerment of our communities,” said Aimee Cox, Director of Sponsorships for Colleges and Universities at Coca-Cola Consolidated. “We are thrilled to support the CIAA tournament and help provide resources for deserving students at CIAA schools.”

Contestants were asked to submit an essay on “How has the history of your CIAA institution influenced you as a student?” The essays were judged on originality/creativity, grammar/vocabulary and overall style.

Since its inception in 2011, the CIAA Essay Contest Presented by Coca-Cola and Food Lion has awarded over $210,000 in scholarships to deserving CIAA students.

Walker said the scholarship will help her toward her goal of graduating debt-free.

"From attending the presidents luncheon to walking out on the court during the men's championship game, I felt like a super star," she said. "I had the amazing opportunity to network and brand myself in ways many students will not have the chance to do so. And for that I am so grateful."

Dawson said accepting the scholarship in front of thousands of fans at the Spectrum Coliseum was surreal.

"I am paying for much of my education out of pocket," she said. "So this award will certainly help with that."