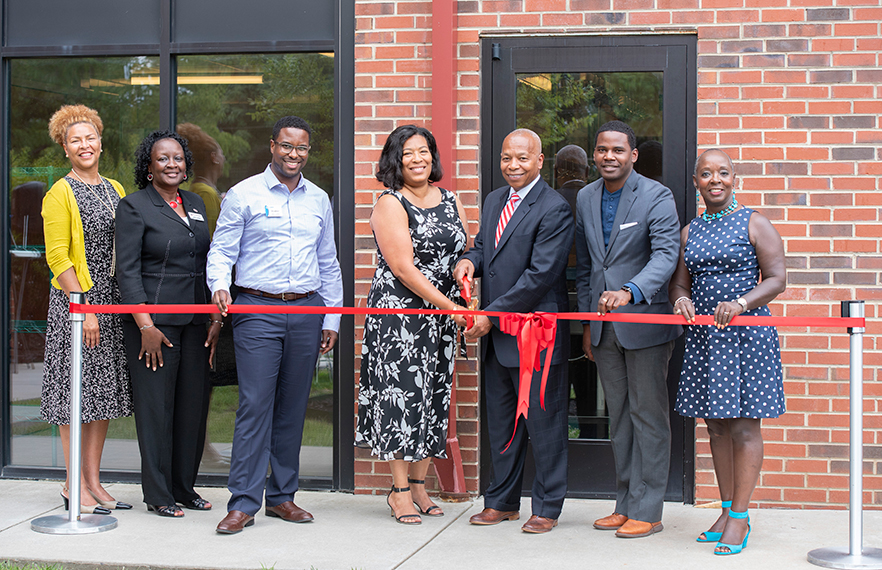 Officials from Winston-Salem State University (WSSU), the City of Winston-Salem and the S.G. Atkins Community Development Center (SGACDC) cut the ribbon on Winston-Salem’s first shared-use commercial kitchen during a ceremony at The Enterprise Center on Monday, June 25.

“Part of the mission of the S.G. Atkins CDC is to help people in this community grow businesses,” said Carol Davis, executive director for the SGACDC. “Until now, we have worked with people who needed office spaces, but now the Enterprise Center can make this commercial equipment available. This is something that has been missing in our local food scene, and we're happy to have it here.”

The kitchen, located in the Enterprise Center, is funded through grants from the City of Winston-Salem and the U.S. Department of Commerce.

The 895-square-foot kitchen has three refrigerators, three freezers, and several pantries with shelving for storage. It also has a six-burner range, a 40-pound fryer, a double convection oven, a 40-quart mixer, and a baker’s station. There's also an ice machine and a dishwasher.

The kitchen will help caterers and food entrepreneurs who have products that they want to package and sell in stores and online, Davis said.

The kitchen will be closely regulated by the Forsyth County Health Department. Davis said to be considered, users must have their business plan approved by the Enterprise Center, have insurance and be food safety-certified and have a permit from the health department.

Shanta Hauser Faison, who worked as an executive chef for 11 years, is among those who has been waiting for the new kitchen to open. She developed a business plan and received state approval in February to launch Rosey Blooms, a food business named after her grandmother. She’s hoping the commercial kitchen can help her take her business national, starting first with her own recipe of collard greens.

"To know that there's a consistent and structured place where I can practice and expand my craft without fear of the obtaining the proper support alleviates so many barriers," Faison said. "Just as importantly, it also provides an environment in which I am able to share my experiences with other chefs in pursuit of a higher goal while learning from their experiences as well."

The Enterprise Center, a development of SGACDC, aims to help people in the communities around WSSU grow businesses. The center also offers: a business incubator; workshops and classes for entrepreneurs; and a conference and banquet center. The center also houses WSSU’s School of Health Sciences Virtual Hospital, the Center for Entrepreneurship, the Center for the Study of Economic Development (CSEM), and WSSU’s Master of Business Administration (MBA) program.

For more information about the S.G. Atkins CDC and its programs, please visit the website. 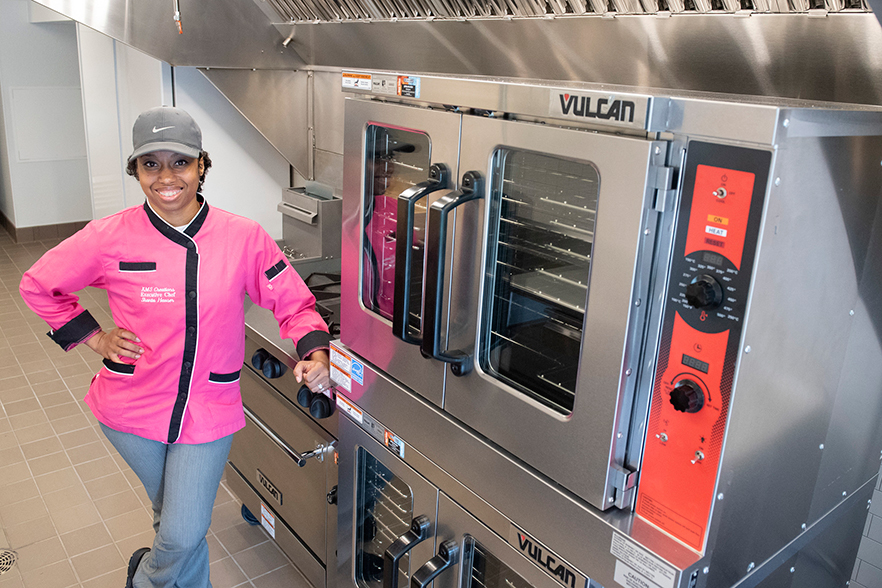 Shanta Hauser Faison, who worked as an executive chef for more than 10 years, has been waiting for the new shared-use commercial kitchen to open.
Tags: Alumni, Media, Campus Life