The award, which recognizes an LNC alumnus who has made a significant improvement in the quality of life, economic well-being, and sense of community in our state, was awarded on May 10 during LNC Class XXV Graduation and Awards Ceremony at the North Carolina State Capitol.

Jeff Frazier, an LNC alumnus and chief operating officer at Pyron, presented the award to Robinson. 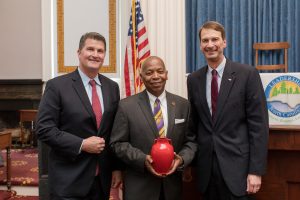 "Dr. Robinson has consistently led by example, working on solutions to challenging issues with leaders from government, healthcare, business, and educational institutions," Frazier said. "He has championed educational opportunity and excellence throughout his career at North Carolina Central, at Cambridge College, and now at Winston-Salem State University.”

The award was created in honor of the late Greensboro congressman who was instrumental in the early days of Leadership North Carolina.

Robinson, a member of LNC Class II, became WSSU's 13th chancellor in 2015 after three decades of experience as a faculty mentor, dean, department chair and provost.