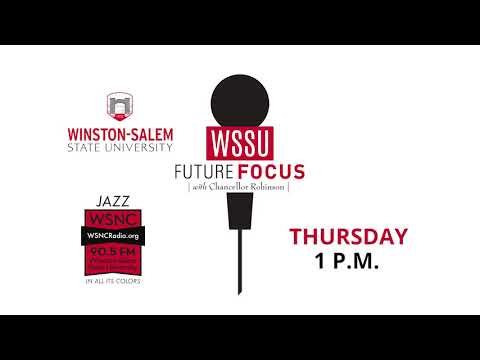 “WSSU Future Focus” will debut at 1 p.m. on Thursday, Aug. 23, with Robinson introducing a few new faces at WSSU.

“We’re excited about adding ‘WSSU Future Focus’ with Chancellor Robinson to WSNC’s lineup,” said Brian Anthony, who joined WSNC as general manager in February. “Our listeners often tell us that they want to hear more about what’s going on here at WSSU. So, we’re listening. This new show will help the university share its unique story to the Piedmont Triad and beyond.”

Scheduled guests for the first show will include: Anthony Graham, provost; LaTanya Afolayan, vice chancellor for Advancement; and Darryl Scriven, dean of the College of Arts, Sciences, Business and Education.

The show will air each Thursday at 1 p.m. Staring with the Aug. 30 show, Robinson will be joined by co-host LaVie Leasure, interim dean of first-year, second-year and transfer-year experiences and engagement, and associate professor of English at WSSU.

You can listen to the show by tuning into 90.5 FM or at wsncradio.org.