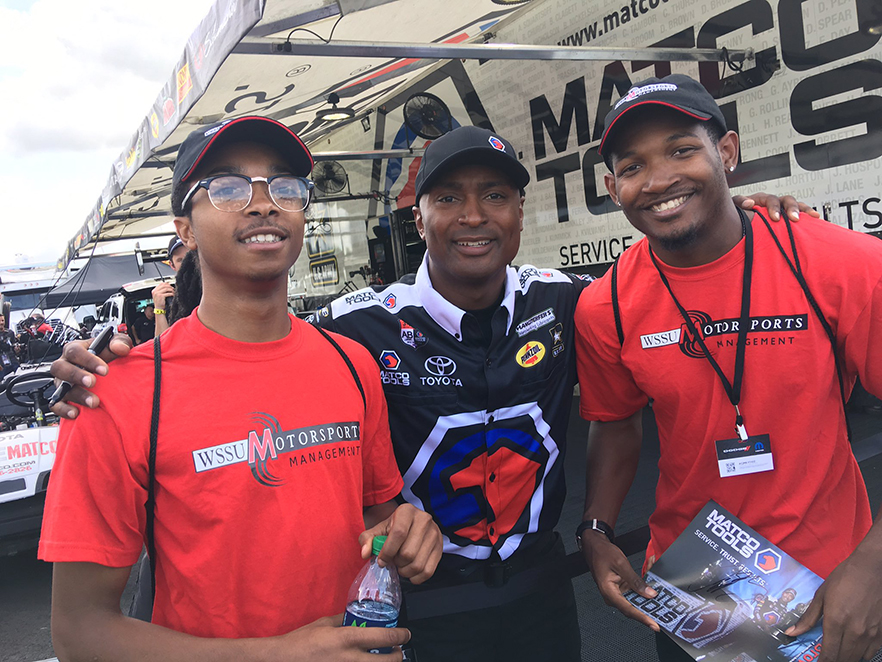 Darrell “Bubba” Wallace Jr. – the first full-time African-American driver in NASCAR’s elite series since 1971 – is changing the face of NASCAR.

Wallace’s success this season also is on the minds of students at Winston-Salem State University (WSSU), which is the only historically Black college and university (HBCU) to offer a bachelor's degree in motorsports management.

“With Bubba here now, it’s like, ‘Wow, we have someone that looks like us out there competing at a highly competitive level,’ ” says Walter Thomas III, a junior motorsports management student from Indianapolis. “Even though NASCAR has always been looked at as a predominantly white sport, you can look around at any of the races and see African-Americans at the track. For me personally, I feel this will help me in the pursuit of one day racing in the NASCAR Cup Series.”

Christopher Gilbert, a junior motorsports management student from Harvey, Louisiana, says it’s exciting to see a driver who looks like him.

“I’m excited about my career choice and seeing an African American driver makes me want to work harder in my field,” Gilbert says.

Dr. Clay Harshaw, an assistant professor and coordinator of the motorsports management program at WSSU, says he’s seen an increase in interest this year, in part, due to the success of Wallace.

“Bubba Wallace, who is driving Richard Petty’s iconic no. 43, is giving the sport a new visible face behind the wheel and is inspiring others to look at the field,” Harshaw said.

WSSU’s program, which was established in 2007, has close ties with NASCAR’s Drive for Diversity, which aims to increase minorities and women within the sport. Drive for Diversity is the same program that helped a 16-year-old Wallace get his start as a driver.

WSSU’s motorsports management program gives students an overview of motorsports, from the grassroots level to the top levels of racing, and also provides students with extensive field experience.

“I tell students that this is the most fun major you can have in school,” Harshaw says. “Where else are you required to attend races as part of your schoolwork? With that fun, though, comes a lot of hard work – with field experiences at the events and in the classroom.”

WSSU students have interned in media relations for Richard Childress Racing and Chip Ganassi Racing in NASCAR; in general management and marketing for Don Schumacher Racing in the NHRA; and in marketing at Charlotte Motor Speedway and Virginia International Raceway.

WSSU is one of only two universities in the nation – and the only public university – to offer a motorsports management bachelor’s degree program. The program is part of the Department of Health, Physical Education and Sport Studies, which also offers bachelor's degrees in physical education, and sports management; and minors in coaching, sports medicine, and recreation.

Jasmine Gilliam, who graduated in May, was an intern in WSSU's Integrated Marketing Communications.