Kwanza Jones, a Los Angeles-based recording artist, producer, impact investor and philanthropist, will be the speaker at Winston-Salem State University's 2019 Commencement Ceremony on May 10.

“We are honored to have Kwanza Jones as our commencement speaker,” said Chancellor Elwood L. Robinson. “In addition to her talents as a music artist, Ms. Jones is an ardent advocate for empowerment, service to the community, and creating impactful change. She lives by the motto, ‘Own your power, live your purpose, be of service.’ Her thought-provoking and uplifting message will shed light on how our graduates can do just that as they prepare to leave WSSU and begin the next chapters of their lives.”

Jones is an investor, entrepreneur and entertainer who wrote her first album while a student at Princeton University. During that time, she was invited to perform at New York City’s legendary Apollo Theater in Harlem. Upon graduating, she continued to write, produce and perform with numerous hit songs reaching the top 10 on the Billboard music charts.

Jones is the founder and CEO of SUPERCHARGED, a lifestyle and personal development platform that helps individuals continuously improve their fitness, confidence and community. SUPERCHARGED integrates the mind and body to create the ultimate empowerment experience. 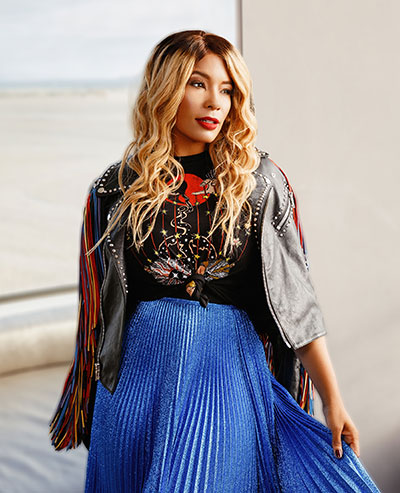 In February, Jones announced a historic $1 million gift to Greensboro’s Bennett College as a salute to her mother and aunt, who are alumnae. Jones and SUPERCHARGED have also supported organizations including, The Trevor Project, the United Way, Foundation for Puerto Rico, and the Boys and Girls Clubs.

Jones serves on the board of directors of several companies. Prior to founding the SUPERCHARGED initiative, she taught cross-cultural negotiations at New York University and was a mediator for the New York City Civil Court. Jones, a native of Washington, D.C., earned a Bachelor of Arts in Public and International Affairs from Princeton University, a Juris Doctor from Cardozo School of Law at Yeshiva University, and a Master of Dispute Resolution from Pepperdine University School of Law.

The ceremony will recognize more than 1,100 graduates who received their degrees during the summer and fall of 2018 and spring 2019. This includes:

Commencement begins at 8:45 a.m. and will be held at Winston-Salem’s Lawrence Joel Veterans Memorial Coliseum. For those who cannot attend, the ceremony will be live-streamed on WSSU’s website.