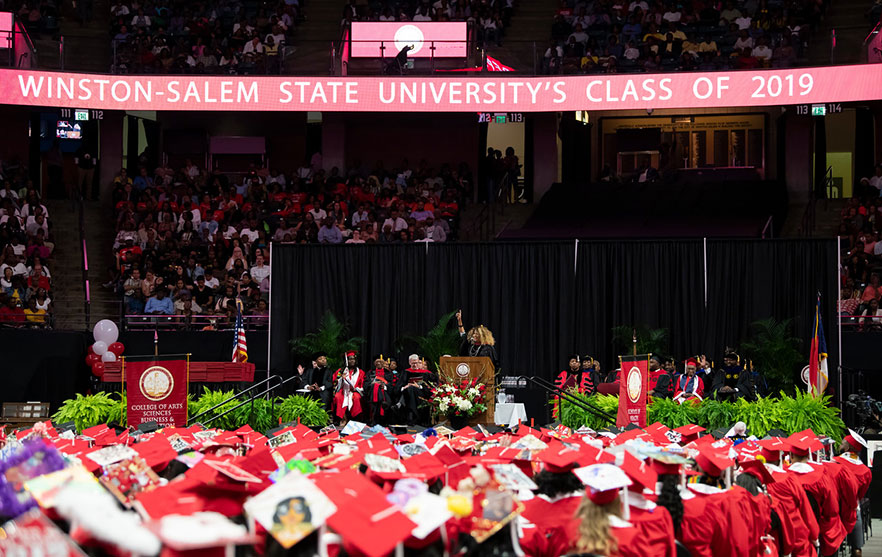 Recording artist Kwanza Jones addresses graduates during the Commencement Ceremony on May 10.

A new study finds that Winston-Salem State University (WSSU) has an annual economic impact in the Piedmont Triad of nearly $500 million and generates more than 8,400 jobs.

Dr. Zagros Madjd-Sadjadi, the WSSU economics professor who conducted the study, said the majority of the impact – $299.3 million – is from the more than 12,000 university alumni who live and work in the Triad.

“What is the biggest way to get an individual from one economic class to another? Education,” Madjd-Sadjadi said. “WSSU is the best in the southern United States for taking low-income students and graduating them in fields that allow them to do well financially. Our alumni are staying in the Piedmont Triad, and they’re contributing to our tax base. This is huge, not only for the families but for our state.”

WSSU's annual impact on the region increased by nearly $57 million since Madjd-Sadjadi's 2018 study.  He said the biggest factor for this growth is the increasing number of WSSU graduates. Since August 2010, WSSU has awarded nearly 11,000 undergraduate degrees.

A key takeaway from the study, he said, is that spending money on education is a wise investment.

The study also found the region's unemployment rate would be 1 percentage point higher (5.5 percent vs. 4.5 percent) and per capita income would be reduced $350 without WSSU.

The study gives a headline number but doesn’t tell the whole story of the university’s overall impact, Madjd-Sadjadi said. He points to:

Ten WSSU undergraduate students assisted with the study through a class project and first presented the research during Scholarship Day on April 11.