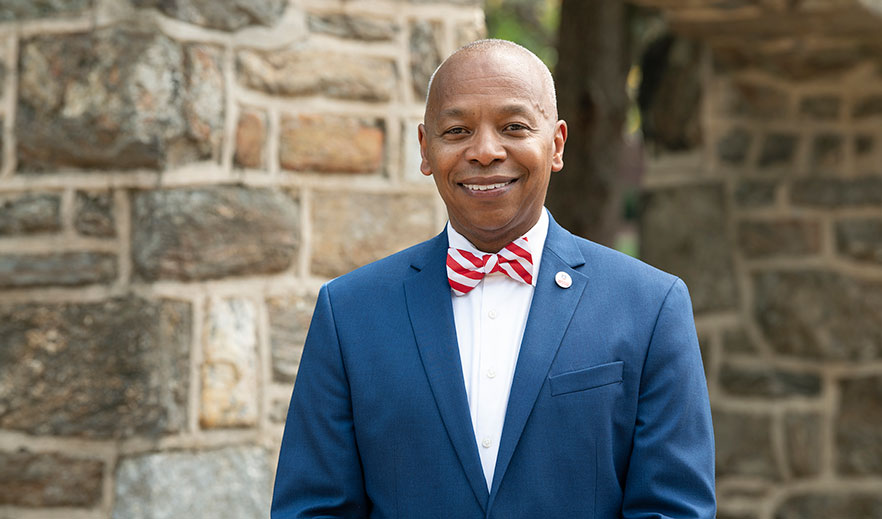 WSSU Chancellor Elwood L. Robinson has spent much of his career in service at HBCUs.

Winston-Salem State University (WSSU) Chancellor Elwood L. Robinson will join luminaries such as Dr. Martin Luther King Jr., Oprah Winfrey, and Justice Thurgood Marshall when he is inducted as a member of the National Black College Alumni Hall of Fame on Sept. 27.

The National Black College Alumni Hall of Fame (NBCAHOF) Foundation annually recognizes graduates of historically Black colleges and universities (HBCUs) who have made significant contributions in their respective fields. Robinson, a graduate of two HBCUs, will be inducted in the category of Education.

“The work of the NBCAHOF highlights the continued relevance of HBCUs and the incredible impact we have in the world,” Robinson said. “I am passionate about the power of education to transform lives and benefit the community. It is a tremendous honor to be recognized for my three decades of work in the field of education.”

In 1993, he was named director of the Minority Access to Research Careers Program, which provides research-training opportunities for students and faculty from minority groups underrepresented in the biomedical sciences. From 1993 to 1996, Robinson also served as chair of NCCU’s Psychology Department. In 2006, he was named founding dean of the NCCU College of Behavioral and Social Sciences.

After a three-year stint at Cambridge College in Boston, Robinson was named the 13th chancellor of Winston-Salem State University, a position he has held since Jan. 1, 2015.

Robinson’s impact on WSSU has been significant. In 2016, the university rolled out a five-year strategic plan that focuses on strengthening liberal education, enhancing academic excellence, and building a commitment to social justice through community engagement. Under his leadership, the university has made great strides in integrating what students learn in the classroom into every element of campus life. Additionally, WSSU maintains the highest six-year graduation rate of any of the UNC System’s minority-serving institutions and is ranked as Money magazine’s no. 1 public HBCU for 2019-20.

Robinson’s commitment to providing a high-quality education is evident across campus. To enhance the student experience, WSSU has focused on providing high-impact practices. During the 2018-19 academic year, more than 2,400 students participated in a high-impact practice, such as an internship, clinical, or student teaching. Additionally, 560 students engaged in undergraduate research, and 1,897 students participated in more than 45,000 hours of service learning through 15 academic courses.

WSSU’s growing reputation in this area has resulted in numerous opportunities to impact the national achievement gap. For example, WSSU has been tapped to serve as one of seven “mentor” institutions in the country to help other universities close their completion gaps among students of color. This spring, WSSU hosted a social mobility summit on campus, offering opportunities for institutions to learn more about bridging the achievement gap. Further, Robinson secured a $3 million gift from the Thurgood Marshall College Fund's Center for Advancing Opportunity to create the Center for the Study of Economic Mobility (CSEM) on campus.

Student success is of critical importance to Robinson. Last fall, WSSU rolled out a suite of student success technologies designed to improve graduation and retention rates for students. These tools help students navigate college from the time they are prospects until after graduation. WSSU was the first HBCU in the nation to adopt several of the technologies, including: “Winston,” a virtual assistant that allows students to text questions about nearly any enrollment or student life topic and receive an immediate response; and Adobe Creative Cloud, an industry-leading creative suite that allows to build their digital literacy, giving students an edge in the job market.

Additionally, in the last year, the university has rolled out new minors in the high-demand fields of public health and urban studies and sustainability. The university also added three new tracks in the Bachelor of Sciences in Health Care Management program – finance and administration, health informatics, and public health – and new honors tracks to several academic majors.

Robinson is one of 14 who will be inducted during a ceremony at the Hyatt Regency Atlanta.