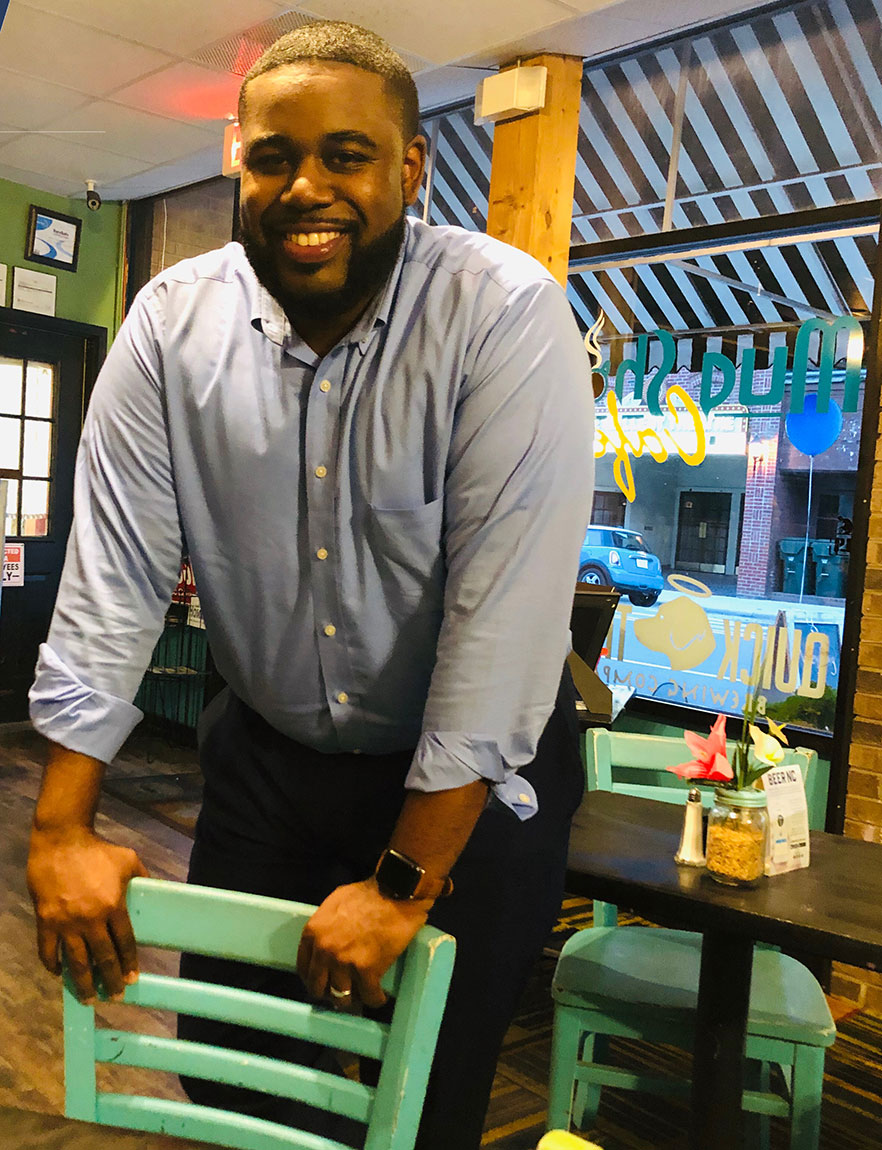 Weyling White '08 was elected mayor of the Hertford County town of Ahoskie on Nov. 5.

Weyling White ’08 will be sworn in next month as the first African American mayor of Ahoskie, a northeastern North Carolina town with a population of about 5,000.

As a student at WSSU, the exercise science major was involved in Black Men for Change and a member of the Beta Iota Chapter of Alpha Phi Alpha Fraternity Inc. The father of three was the first in his family to attend college; he serves as an administrator for the Roanoke Chowan Community Health Center.

When did you decide that you wanted to run for mayor?
I’ve always wanted to give back to my community in some way or another, and this is the reason that I chose to return home after college. The spark started on Oct. 2, 2018. I was in Boone for our first session of the Leadership North Carolina program where I was conversing with our program chair about the struggles of my community and ideas I had that could resolve our issues. He asked me the question that I will never forget, “With all the passion and ideas that you have for your community, have you ever thought about running for office?”

Following that conversation, in May my grandmother’s house and my little sister’s car were both hit with bullets during a shootout that took place in the neighborhood while we were away at a family gathering. That incident was confirmation for me, and I knew I had a responsibility to bring change to my community.

Why is it important to you to serve as mayor of your hometown?
It’s very important for me to serve as mayor of my hometown because I have lived the very struggles of many of the residents in my community. I am not a traditional politician, I am of the people, and my life’s work has been helping others. We are in a time where our town needs energy, innovation, transparency and equity. For years, I have been providing access to healthcare and implementing life-saving programs for my community, and honestly, I feel that I would be doing my community a disservice if I did not utilize my talents and platform to be a voice for the town that raised me into the man that I am today.

In your bio online, you talk about your late grandfather. Tell us a little about him and what you think he’d say about your recent election?
My grandfather was by far the hardest working person I have ever known and also the funniest. Well into his late 60s, he would still crawl under houses and dig ditches, as he took his plumbing business very serious. My grandfather had a third-grade education and boasted about it like it was Ph.D. He was a well-respected businessman in the community and often employed many men that couldn’t find a job elsewhere. He taught me how to work hard, be fair, and most importantly take care of family.

Before he passed, he told me a story about the side of town where I currently reside. He explained that “on the side of the tracks where you currently live, back in my day as a Black man, I couldn’t be caught in your yard after sun down. I might not make it back home.” To know that we have now moved into a time where a person of color is now the face of his hometown, let alone his grandson, would mean the world to him.

Describe Ahoskie in six words or less.
Our motto is the most perfect description, “The Only One.” But I only need one word to describe Ahoskie, and that is the word “Resilient.”

With the election, you will become the first African American mayor in the history of Ahoskie. What does this mean to you?
It means that I have no room for error. There are reasons that in 126 years we never had an African American mayor, and I have to discredit any notion that supports the idea that a person of color is not worthy to hold this office. Breaking this barrier is bigger than me, it is to give courage and show the possibility to the people of color, and young people in general after me that will eventually step up into leadership in our community. I have encountered plenty of racism and prejudice growing up in Ahoskie, and I can honestly say this is a step in the right direction for my town. On the campaign trail, I received support from all walks of life in our town, and although we still have a long way to go, I have a better sense of hope for the future generations to come.

What have you taken with you from your time at WSSU?
Definitely my work ethic! The “work before play” culture at WSSU is something that I still practice to this day. Professionalism is also something that I have definitely taken with me. During my time at WSSU at met some of the most humble, intelligent, young professionals and we all held each other to the same standard. I can honestly say that I would not be where I am today had I not received my education at WSSU. The brotherhood and livelong relationships that I formed at WSSU are dear to my heart, and some of the most important people in my life I met on WSSU campus.

What moment from your time at WSSU most stands out?
My very first Black Men for Change meeting. In a packed front room in the lobby of Brown Hall, I witnessed a room full of young men who looked like me openly discuss real issues and think critically. I had never seen or been a part of anything like this before. All of the slang that we spoke on the yard went out of the window, and this was my very first time having an intelligent meeting with like-minded young men. Without a doubt this experience changed my life. I am still inspired from that meeting and my fire is still lit with the passion to make a difference.

‘00s jam: If you created a playlist of music from your time at WSSU … what three songs would be on it?
“Knuck if you Buck,” Crime Mob; “What You Know About That,” T.I.; and Jezzy's “Let’s Get It/Sky’s the Limit.”