It was the summer of 2014 and Dr. Denise Nation was working on restructuring Winston-Salem State University’s Justice Studies curriculum. She felt it was important for the students to get more up-close, hands-on involvement in the justice system.

Little did she know what an amazing path she was creating for the students, and how involved they all would become in the exoneration of Ronnie Long, a North Carolina man wrongly convicted in 1976 who wound up serving 44 years in prison before being freed last August.

“One of the problems I saw was students were not getting enough practical experience in this type of work,” said Nation, an associate professor at WSSU and the chair of the Department of History, Politics and Social Justice. 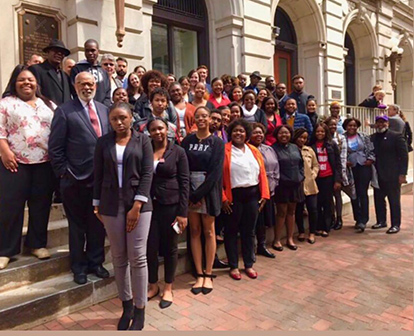 She was exploring different projects she could introduce to the Justice Studies students when she ran across the Ronnie Long case. She was startled by what she read.

“In the summer of 2014 I was researching … looking for cases and activities the students could do. I ran across an article (about Long) on innocence.com by Ashleigh (Long, who is now Ronnie’s wife). I got in touch with her and she sent me all the documents about the case,” said Nation.

Nation spent much of the summer of 2014 poring over those documents.

“After reading about it (the case), I was devastated. He was at his wits end,” said Nation. “He didn’t have any other options. His lawyers had told him he had exhausted his options.”

“I decided we needed to make it (this case) part of the justice department.”

And the Ronnie Long Project was born.

Long was convicted in October of 1976 for the rape of a 54-year-old widow in Concord, N.C. Long is black, the victim was white. From the beginning Long professed his innocence to no avail. He was found guilty by an all-white jury and received two life sentences.

For more than 40 years, Long and his supporters used every avenue available to convince the legal system his trial had been flawed and he was innocent. Every attempt failed until his legal team, led by Jamie Lau of the Duke Wrongful Convictions Clinic, persuaded a judge to allow a review of biological evidence from the scene. That evidence backed Long’s story.

On August 27, 2020, Long walked out of prison a free man after the United States District Court ordered his Oct. 1, 1976 convictions be vacated. A few days earlier the court had ruled Long’s due process rights were violated when he was convicted. He was 21 when he entered prison, 64 when he left.

Long is waiting on a request to North Carolina Gov. Roy Cooper for a full pardon. He cannot receive compensation which he is eligible for until that happens.

When Long’s case went before the Fourth Circuit last summer, Nation and many of her students were there. “The university gave us some money and we took almost 30 students to the Fourth Circuit. There were so many of us they had to bring in extra chairs,” said Nation.

It was fitting the Justice Studies students from WSSU and their professor were in the courtroom. For a half-dozen years, the group had been one of Long’s largest and loudest proponents.

The Ronnie Long Project has been part of Justice Studies classes since 2014. Everyone involved in the curriculum during that period participated in the project.

“We gave students an option, ‘if you don’t believe in this, you can do something else.’ We never had one student who opted out.”

Nation doesn’t know the exact number of WSSU students who have been involved over the years, but simple math says there were many. The Justice Studies program averages about 18 classes a semester, Nation said. Some of those classes are large, as many as 80 students. And the Ronnie Long Project has been ongoing for six years. Which means a lot of WSSU students have been part of the project.

They weren’t just sitting behind desks debating the case, either. They were constantly working to bring attention to Long’s plight.

“Students worked on a lot of projects over the years. They created a Facebook page, Instagram and Twitter,” said Nation. “We had a Ronnie Long Awareness Week and students distributed information. We had teach-ins and talks ins.”

There were also letter-writing campaigns to two different governors, a gathering at the North Carolina attorney general’s office, a march on the governor’s office and a march on the state capitol in Raleigh.

They composed a song and wrote a poem about the case. Twitter Tuesdays became a passion of the classes as they tweeted out “Free Ronnie Long” every Tuesday for months.

Long himself became part of the project. Nation arranged for him to make periodic calls to various Justice Studies classes so students could discuss the case with him and ask questions. He has visited the WSSU campus since his release.

Nation said attention is now on Long’s pardon. Before long, though, she will be working on the next project.