Former lawmaker, educator, activist, and Winston-Salem State University (WSSU) alumnus Larry Womble dies after a period of declining health, leaving his mark on the university, the city of Winston-Salem and beyond.

A major social justice promoter, Womble advocated to improve the conditions of the Columbia Terrace neighborhood in Winston-Salem and was a dedicated member of local groups, including the Experiment in Self-Reliance, the Winston-Salem Arts Council, and the NAACP. However, Womble may be most noted for his work on passing legislation to financially compensate victims of the state’s forced sterilization program and being a major supporter of the North Carolina Racial Justice Act of 2009, which prohibits seeking or imposing the death penalty based on race.

WSSU paid tribute to Womble in a proclamation:

“Representative Womble’s entire life exemplified the WSSU motto of “Enter to Learn. Depart to Serve;” Now, Therefore, be it proclaimed that Winston-Salem State University recognizes Representative Larry W. Womble’s remarkable achievements and contributions and acknowledges the great loss to the world as a result of his passing.”

To continue Former State Rep. Larry Womble’s legacy, and support the continued success of WSSU students, donations can be made to the Womble/Gwyn Scholarship Fund at Winston-Salem State University. 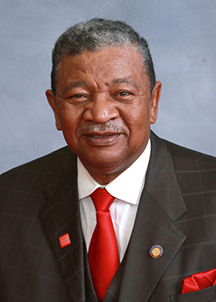