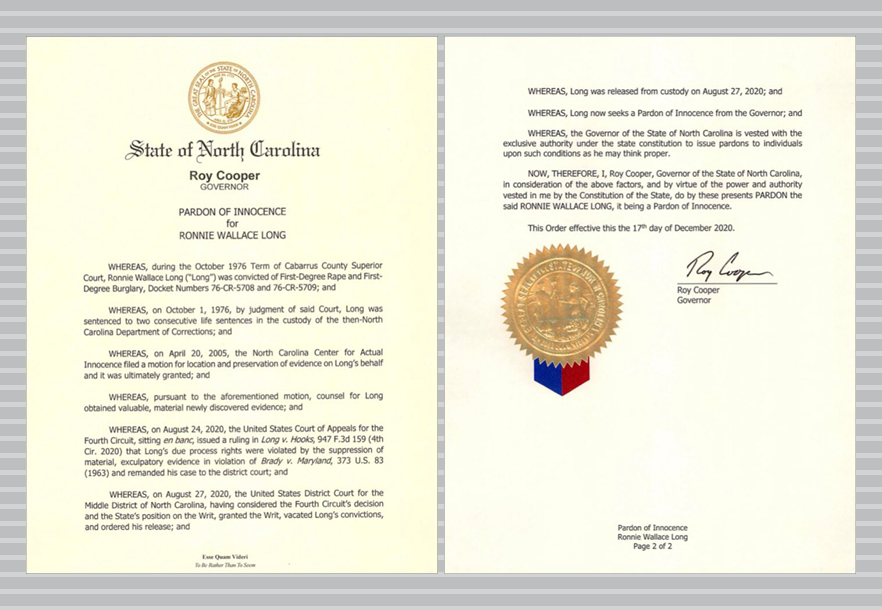 Ronnie Long, a North Carolina man who served over 40 years in prison after being wrongly convicted in 1976 and the focus of Winston-Salem State University Justice Studies program's Ronnie Long Project, has been pardoned by North Carolina Gov. Roy Cooper.

The Ronnie Long Project has been a part of Justice Studies’ curriculum since 2014. The program was able to celebrate Long’s release and the completion of their work after his conviction was overturned last August.

“We gave students an option, ‘if you don’t believe in this, you can do something else.’ We never had one student who opted out,” said Denise Nation, associate professor and chair of the Department of History, Politics and Social Justice in a previous article about the project. “As it moved on, students in all justice classes were involved,”

Now that Long has been pardoned, he is qualified to received up to $750,000 in compensation. The Justice Studies Department is in the process of finding another case for a new project.

About Winston-Salem State University
Winston-Salem State University fosters the creative thinking, analytical problem-solving, and depth of character needed to transform the world. Rooted in liberal education, WSSU’s curriculum prepares students to be thought leaders who have the skills and knowledge needed to develop innovative solutions to complex problems. Founded in 1892, WSSU is a historically Black constituent institution of the University of North Carolina with a rich tradition of contributing to the social, cultural, intellectual, and economic growth of North Carolina, the region and beyond. Guided by the by the motto, “Enter to Learn, Depart to Serve,” WSSU develops leaders who advance social justice by serving the world with compassion and commitment.