The City of Winston-Salem has picked Winston-Salem State University’s Center for the Study of Economic Mobility (CSEM) to receive its annual Fair Housing Breaking Barriers Award for 2022. The award will be presented on April 21.

The Breaking Barriers Award is presented annually by the New Horizons Fair Housing Committee of the City of Winston-Salem’s Human Relations Commission to a community agency, organization, business, or nonprofit for its furtherance of fair housing opportunities within the city. 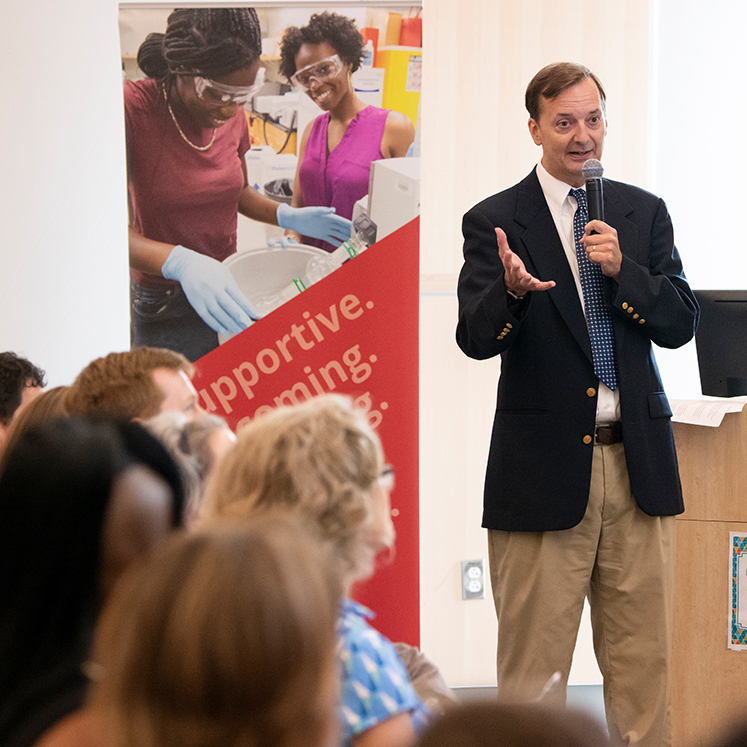 “It is very gratifying to win this award and to be included with all the community organizations that are working so hard. I’m proud of our entire team,” said Richardson, Ph.D., the founding director of CSEM. “We work to make the invisible visible, by measuring outcomes of various initiatives.  We find out what is working and what is not, in terms of economic mobility, using solid data and proven statistical techniques. This is a real honor to our whole team.”

CSEM’s mission is to better understand the causes of low economic mobility in Forsyth County. It was born out of a Harvard University study that researched the possibilities of the lowest 20 percent economically escaping poverty in their lifetimes. It was a county-by-county nationwide study. The results showed Forsyth County was third from the bottom nationally.

“It startled me,” Richardson said of the study results.

In what can only be described as serendipity, Richardson was approached by a donor at about the same time who wanted to fund a research center at WSSU.

“Shortly after (the study came out) donors said they would be interested in providing funding for a center and asked if I had any ideas,” said Richardson. “I had been puzzling over this problem and I knew this (donation) would give us ways to come up with some innovative solutions.”

WSSU received a $3 million grant in the fall of 2017 from the Thurgood Marshall College Fund’s Center for Advancing Opportunity (CAO), an initiative supported by the Charles Koch Foundation and Koch Industries. The CAO focuses on researching barriers to opportunity in fragile communities.

“Nobody gave us a playbook on how to open a center. It was sort of like here’s $3 million, now go (open a center),” said Richardson. “It was wonderful in one way, but it put me in awe. What do we do and how do we do it?”

WSSU received the grant in September of 2017 and Richardson said he “hit the ground running.” He said most centers are siloed, but he wanted to be able to look at the problem in Forsyth County from all perspectives and he called on fellow WSSU faculty members to help.

“By November I had done a call for proposals across the (WSSU) faculty. What I said was we all have our blind spots in our departments. The whole idea of CSEM that I think is pretty unique is we have an interdisciplinary center that cuts across many disciplines, but asks the same questions: ‘if it is a ladder and we all want to climb it, how can we identify those broken rungs?’”

An area of focus for CSEM has been a first-time homeownership program that Forsyth County began several years ago that works primarily with below-median income and minority families.

“This program is a hidden gem,” said Richardson. “We are trying to scale it up with our research.”

Richardson and his team spent eight months doing a deep dive into the data from all the homeowners helped by the program over a nine-year period to give the county a comprehensive view of the program’s impact.

They didn’t have a comprehensive view of what had happened with the homeowners. For eight months, with the county and the team, they input the data from hundreds of notebooks that had been sitting on shelves for years. Each notebook contained a human story of upward mobility. "We tracked where they moved, the change in market value, home equity, wealth, changes in crime in their new neighborhoods,” said Richardson.

“This is a program that works. It’s a win for the county. We have neighborhoods that have homeowners instead of renters and they pay property taxes. Foreclosure rates are negligible, and their neighborhoods are 95 percent safer. It’s a game-changer for economic mobility.”

CSEM has been able to fund “about a dozen” faculty fellows over the past four years to help with research. WSSU students are also involved in the project as interns for the faculty fellows.

CSEM’s original grant runs out this year. Richardson has been writing grants to hopefully raise funding to keep the project alive.

“What we hope that his award does is to give us more credibility and increases the awareness of the work,” said Richardson. “Not only from the government sector but from the private sector. We don’t think necessarily government needs to solve every problem.

“The great thing about Winston-Salem is we have a lot of devoted private institutions that want to be in this space. We hope this just raises our profile and allows us to partner with more organizations.”

CSEM’s documentary on the program, titled "Home Stretch", premieres at the 2022 River Run Film Festival in Winston-Salem on April 23rd.