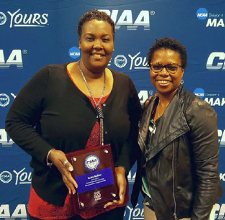 Winston-Salem State University Director of Athletics, Tonia Walker, was named CIAA Athletics Director of the Year by the AD Association. Walker, in her second full year at the helm of WSSU’s athletics department, oversaw a 2015-16 year that brought the Rams five championship titles: football, volleyball, women’s indoor track & field, women’s cross country, and softball. In addition to hosting the Indoor Track & Field Championship and a volleyball roundup with her staff, Walker serves on the Division II Athletic Directors Association’s Board of Directors and is the President of the CIAA AD Association.

Walker called the day “an emotional one”, and said she was humbled to be named the CIAA Best AD for the 2015-16 year, as the Rams also captured the Loretta Taylor All-Sports trophy, indicative of the best women’s athletics program in the CIAA.