The Winston-Salem State University Choir’s hard work is paying dividends with the notification that Walton Music, an internationally acclaimed music publishing company, wants to feature the choir in demos on their web site and a promotional CD in the fall. 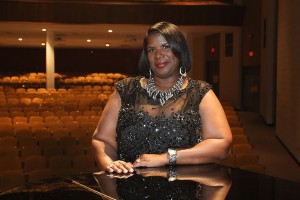 In a communication to Maestra D’Walla Simmons-Burke, Walton editor Susan LaBarr, said she was preparing the Stacey Gibbs’ arrangement of "My God is a Rock" for publication at Walton when she discovered WSSU choir’s recording of the piece on YouTube.

Simmons-Burke was ecstatic about the company’s request for use of the WSSU Choir’s recording. “This is quite an honor for not only the choir and me, but the university, because it positions us internationally within the music world,” said Simmons-Burke. “These students have worked extremely hard this year, both academically and musically and have represented the university well! I’m so proud of them!”

“Being a member of the Winston-Salem State University Choir and Burke Singers has been a dream of mine since I was a young girl,” said soprano, Simone Price, who has served the choir as student conductor and section leader over the past few years. “I have been afforded countless opportunities to travel, network, perfect my craft, and learn so much all while doing what I love!”

Tenor, Malik Wilson-Gaston agrees. In preparation for recording of My God is a Rock CD, Wilson-Gaston said, “Practice makes perfect! We typically rehearsed every day during class, Monday through Friday, from 12 noon until 12:50 p.m. Along with our regular class schedule, we met some Wednesday evenings in preparation for our national stage appearance (Carnegie Hall) and the recording of our recently released CD and title single – My God is a Rock.”

“We have section leaders who ran separate rehearsals at least once a week per section, and if need be, our conductor would schedule a weekly night rehearsal,” said Price. “Learning ‘My God is a Rock’ was not work. The piece was challenging, however, we had a tendency to fall in love with Stacey Gibbs’ work so much so that we forgot we were working.”

“Getting the chance to both travel and sing with this Grammy-nominated choir has been an experience filled with positive memories that will last a lifetime,” said Wilson-Gaston.

The Choir’s tradition of excellence and performance achievement dates as far back as the turn of the 20th century. It is one of the oldest student organizations on campus. Before there was a Department of Fine Arts at WSSU, there was the choir.

Choral music played a big part in campus life and in the life of the wider community in the early days of WSSU’s development. The Choir’s performances, in some of the nation’s renowned venues, dates back to the 1940s at Radio City Music Hall and Lincoln Center. Some of the choir’s selections were also taped or broadcast on the NBC programs called “Great Choirs of America.”

Today, under the direction of Maestra Simmons-Burke, the Choir’s efforts have led to performances of commissioned works, such as "On Imagination" and "I Too" by Undine Smith Moore, "Recent Reflections on Deep River" by Michael Williams, "Oh! What a Beautiful City" and "Holdin’ On" by Stacey V. Gibbs, and "Come Sunday" arranged by S. Van Dixon.

The WSSU Choir has recorded eight CDs which include Joy To The World; I Wanna Be Ready; Lift Ev’ry Voice and Sing; Hold Fast To Dreams; Pieces of a Dream; Somewhere Far Away; The Legacy Continues: 20th Anniversary Celebration of D’Walla Simmons-Burke; My God is a Rock. One recording, "Somewhere Far Away," on major record label Albany Records was nominated in five categories for a 2010 Grammy Award.

Walton Music, a division of GIA Publications, a publisher located in Chicago, Ill., was established in 1950 by Norman Luboff as a publishing house for Luboff’s choral arrangements and compositions. Today, Walton serves the choral community by publishing works by noted composers such as Eric Whitacre and Ola Gjeilo, and promoting both new composition and the preservation of classics such as Vivaldi’s Gloria. Editions in the Walton catalog number in the thousands.