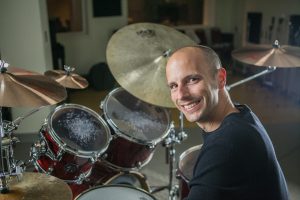 It’s not everyday that anyone can say, “I have been nominated for an Emmy Award.” But, a Winston-Salem State University (WSSU) associate professor of music can say that. Even though the entry he was associated with did not win, just getting the nomination was a big deal.

Dr. Tony Artimisi, WSSU Liberal Studies chair and associate professor of music, is smiling these days because an episode of the television show Ruby’s Studio entitled “The Siblings Show,” where he contributed drums and percussion on the soundtrack “Boss of My Body," was nominated for an Emmy for Musical Composition/Arrangement.

“It’s definitely an honor and I am thankful for the opportunity,” said Artimisi about the nomination. “That doesn’t happen everyday.”

Artimisi recorded his drum and percussion parts for the video in the university’s recording studio in the Anderson Center, where his drums are located. He explained he was hired for the recording by composer Christian Moder, who was directly nominated for the Emmy.

Artimisi discussed his life in music and what the nomination meant to him.

Artimisi, who joined the WSSU faculty in 2005, teaches percussion and is coordinator of the Music Business program. Prior to joining the faculty at WSSU, he was an adjunct faculty member at Tennessee State University in Nashville, Tennessee.

He is a featured artist for leading drum maker Mapex Drums and Paiste, Inc. cymbals. His other endorsements include Vic Firth Drumsticks, Grover Pro Percussion, and Moravian Percussion.

In addition to being a musician and academician, he is also an author and composer, having penned a number of musical compositions, articles, and books.

The Emmy awards show was Saturday, September 24, in Philadelphia.