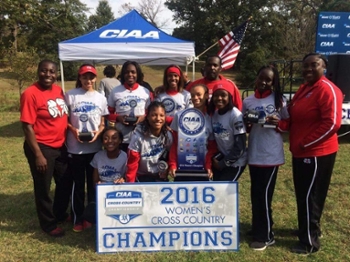 The Rams easily won the team title with 27 points, with Virginia State a distant second with 106 points.

Five of the Rams’ seven runners reached the top 10 to claim the championship and to earn spots on the 2016 CIAA Women’s All-Conference team. WSSU sophomore Domtilla Kiplagat claimed her second straight individual CIAA championship when she placed first with an 18:35.35 to be named the CIAA Women’s Cross Country Runner of the Year for the second straight season as well. Senior Fawzia Kheir wasn’t far behind when she placed second by just six seconds with an 18:41.38. Fellow senior Taska Johnson added a fifth-place finish when she ran a 19:29.03 while senior Micalyne Zimmerman added a ninth-place finish at 19:51.08 while senior Phyllis Cheruyiot rounded out the top 10 with a 19:54.97.

The Rams men’s team had their highest finish since 2012, placing sixth. Freshman Mitchell Brown led the way for the Rams with a third-place finish at the meet with a 28:46.75. Brown was the first WSSU runner to place in the top 10 since former Ram Andrew Chebii claimed three straight individual conference championships and he also claimed a spot on the 2016 CIAA Men’s Cross Country All-Conference team. Senior Harold Blakely placed 20th with a 31:14.34, and junior Julian Massey added a 27th place finish at 31:57.02.

The championships were held at Joseph Bryan Park in Richmond, Virginia.

With the conference championships complete, the Rams men’s and women’s teams will turn their attention to the 2016 NCAA Division II Atlantic Regional Meet, hosted by Slippery Rock University at Cooper’s Lake Campground in Slippery Rock, Pennsylvania, on Saturday, Nov. 5.