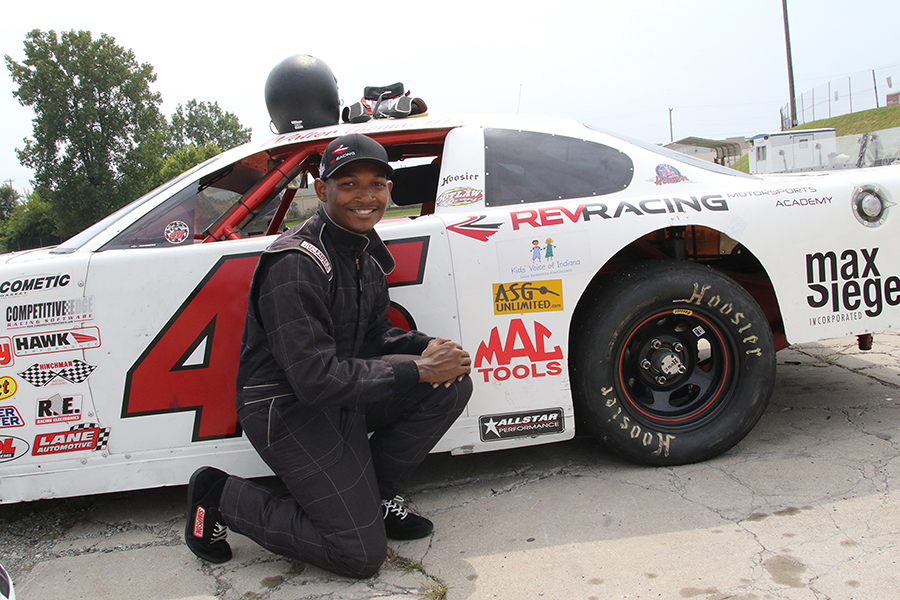 Walter Thomas with his race car.

For Walter Thomas III, the youngest of four siblings from Indianapolis, Indiana, auto racing is in his blood. It’s a generational thing going back to his grandfather, and his father, who were both race car drivers.

“I fell in love with the sport at a very young age. Some of my very first memories of life were of being at the race track with my father back when he used to race,” recalls Thomas, a freshman at Winston-Salem State University. “As time went on, my dad noticed that I had taken a liking to the sport and decided to give me a shot.”

Thomas’ first taste of racing was at the age of 4, behind the wheel of a quarter midget, a developmental race car for children. He advanced from racing quarter midgets to junior dragsters (a scaled-down version of a top fuel dragster, which can reach speeds of up to 85 mph), and from junior dragsters to bandoleros (a type of entry-level racing in the United States and Canada, where cars can reach in excess of 50 mph, but do not accelerate very quickly. Cars are built like miniature stock cars, with a tube frame and sheet metal cage).

“And, I guess you could say the rest is history or my story,” he says.

Even before he was old enough to have a driver’s license, Thomas became the first African American to win the Outlaw Track Championship at Indianapolis’ Speedrome in 2012. He was also awarded NASCAR’s Diversity Young Racer award.

Winning this award was a big deal for Thomas. “The NASCAR ‘Drive for Diversity’ searches for minority drivers all over North America, Canada, and Mexico. I’d love to compete on their race team (Rev Racing, owned by Max Siegel) based out of Concord, NC.”

Thomas has been deliberate about the choices he has made, especially in regard to his pursuit of becoming a professional racecar driver. “I want to be ‘The Michael Jordan of NASCAR'." 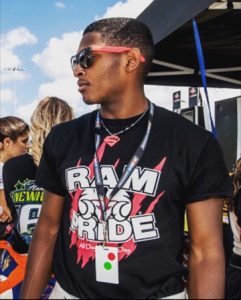 In his view, the first best choice he made to reach his goal was coming to WSSU. He hopes to maintain his academic momentum from Lawrence North High School, where he had a 3.9 GPA. “I chose WSSU because it was one of the only schools in the entire nation to provide a motorsports program of this caliber. I made up my mind a long time ago about attending this university just for that reason,” Thomas said.

WSSU’s location also put him in the center of American motorsports. “I figured if I was ever going to have a chance to make it as a race-car driver, I was going to have to leave behind Indiana and make the move to NASCAR country, and since this is very time sensitive, the sooner the better,” Thomas said.

Short term, Thomas aims not only to make the honor roll but also to make NASCAR’s Drive for Diversity 2017 Race Team, a development program that aims to identify young, ethnic minority and female drivers and pit crew members. In October, he was one of 17 drivers who competed at Florida’s New Smyrna Speedway at a national tryout. His top speed on the track was 120 miles per hour. Six drivers will be chosen for Rev Racing in January.

“If I am chosen, I’ll be able to run in the Whelen All-American series here in North Carolina at Hickory Motor Speedway,” Thomas said.

Thomas said he wouldn’t mind running at Bowman Gray Stadium, located near the WSSU campus, which held its first NASCAR-sanctioned event in 1949. “It’s a historic race track, and I think it would be pretty cool to run a race at my school.”

Long term, Thomas said his goals are to obtain his bachelor’s degree in Motorsport Management, to become a full-time cup driver in NASCAR, and own his own racing team.

“About two years ago Walter contacted me through social media to say he was coming to WSSU to study motorsports management. He wanted to attend an HBCU and found the perfect place to learn and connect his passion for racing,” said Clay Harshaw, assistant professor in the Department of Human Performance and Sport Sciences, and coordinator of the WSSU Motorsport Management program. “Through the program at WSSU, Walter will be able to develop the skills he needs, such as sponsorship management and public relations, to enhance his racing career.”

Harshaw said that in the short time he has known Thomas, he has found him to be a good student. “He contributes to the daily discussions and is willing to go beyond the requirements to enhance his learning. Walter has also displayed a strong work ethic in the field experiences he has participated in this semester,” Harshaw said. “These are the same characteristics that will help him become a successful race car driver.”

See Thomas in action as a youngster and hear him talk about his dreams.

WSSU is the only four-year public university in the country that offers a bachelor of science degree program in motorsports management. As the only HBCU in the nation to offer a degree in motorsports management, WSSU is complementing NASCAR’s Drive for Diversity program to include more minorities and women in the higher levels of motorsports. With numerous opportunities throughout the curriculum for field experience and collaborative learning, program completers are well prepared for entry-level positions in the motorsports industry. WSSU’s solid relationships across the racing industry provide wholesome experiential learning in the motorsports field and help ensure enhanced career placement after graduation.