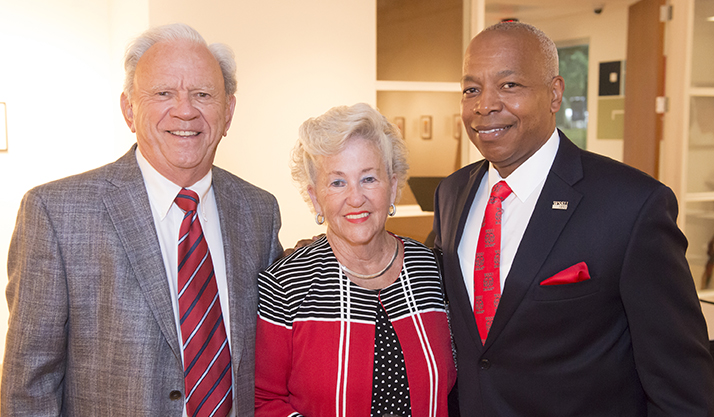 The Winston-Salem State University Foundation has received a $300,000 bequest from John Taylor, the retired CEO of Taylor Oil Company and a longtime supporter of the university.

Taylor passed away in August 2016. The gift will create an endowment at WSSU that will support student success.

“Although Mr. Taylor is not an alumnus of WSSU, he understood how our university contributes to the social, cultural, intellectual and economic growth of the region, the state, and beyond,” said WSSU Chancellor Elwood L. Robinson. “Throughout the past 15 years, he helped WSSU to move forward with our mission of preparing diverse students for success in the 21st century. We are so grateful for his support and friendship. With this gift, Mr. Taylor will create a lasting legacy here at WSSU.”

Taylor first became engaged with the university by serving on WSSU’s Board of Visitors. In 2004, he joined the WSSU Foundation Board of Directors where he served as an active member of the finance and audit committees. Taylor was also a member of the Board of Trustees Endowment Committee, which is charged with management oversight of all of the university’s endowed funds.

The bequest is just one of the many ways Taylor and his wife, Peggy, provided financial support to the university over the past 15 years. The Taylors created several endowments, including funds to support a Ram Athletic Leadership Academy, the John and Peggy Taylor Student Technology Endowment Fund, and a book fund for student-athletes. The Taylors also made the first individual gift – $300,000 – in support of the university’s Student Success Center. All told, the Taylors’ gifts total nearly $1 million.

“Mr. Taylor’s profoundly positive impact on the university is almost immeasurable,” said Michelle Cook, WSSU vice chancellor for advancement. “With his wife, he created endowments and made gifts that have allowed our students to access needed technologies, learn valuable leadership skills, and succeed academically. He championed the cause of education for the entire state of North Carolina. His investment in WSSU is helping to provide educational access. He was a wonderful friend to Winston-Salem State University.”

Taylor, who was 86 at the time of his death, grew up in Winston-Salem, graduating from R.J. Reynolds High School. He attended the University of North Carolina at Chapel Hill before serving in the U.S. Army for two years. After returning home, he joined the family business, Taylor Oil Company, and married Marguerite (Peggy) Bain. He is survived by his wife, three children, eight grandchildren and three great-grandchildren.

For more information about making a planned gift to the university, visit http://wssulegacy.org or contact Andrea Jenkins at 336-750-3114 or jenkinsam@wssu.edu.