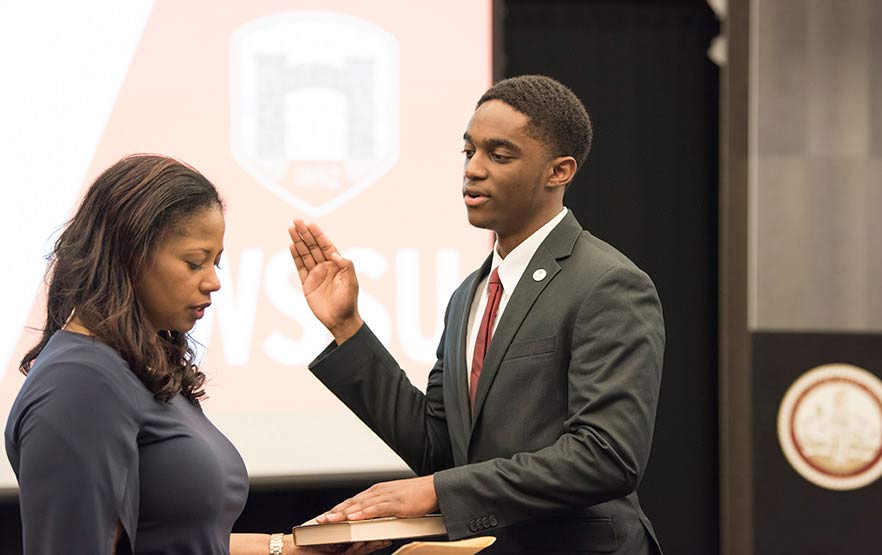 Camille Kluttz-Leach, vice chancellor and chief of staff at WSSU, administers the oath of office to Javonty Hunter, president-elect of the WSSU Student Government Association.

Hunter, a senior from Charlotte, was elected SGA president during the spring semester, a position that also entails serving as the ex-officio member of the BOT. He will serve on the board for the 2017-18 academic year.

A graduate of North Mecklenburg High School, Hunter is a business administration major. He says a major goal of his administration is to increase student involvement in SGA, helping more students gain beneficial leadership experience.

“I would like to tell the students of WSSU that what is to come will be special,” he said. “This is a landmark year, 125 years of excellence and achievement, and I want you all to know that the Hunter Administration will be an administration of promise, hard work and integrity. We will do everything in our power to represent our students in the fullest capacity and will exuberate governance in its fullest capacity.”

Also at the Board of Trustees meeting, WSSU honored members who are going off the board. This was the final meeting for Trustees Dr. Karen McNeil-Miller, Debra Miller and Pradeep Sharma.