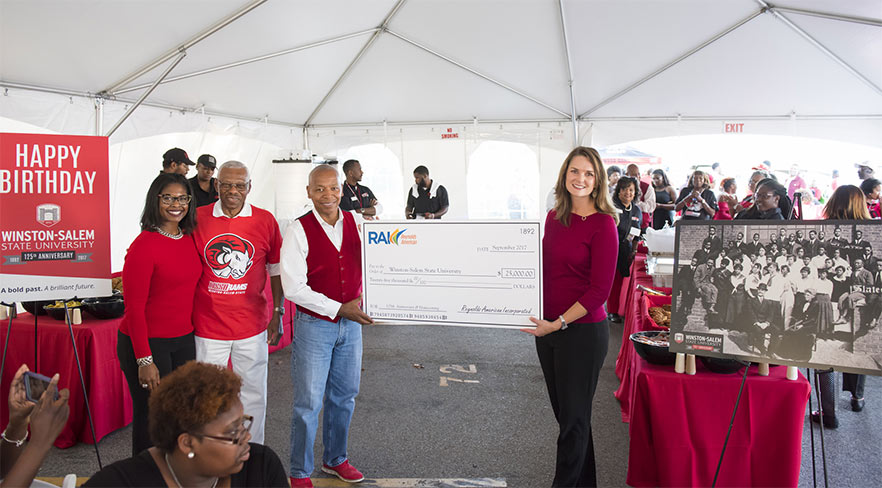 The gift, which was announced during WSSU’s home football game on Sept. 30, supports the costs of two scholarship fundraisers for WSSU’s 125th anniversary.

“For more than 125 years, R. J. Reynolds Tobacco Company (RJRT) and Winston-Salem State University have built economic and social capital in Winston-Salem, North Carolina,” said Michelle Cook, vice chancellor for advancement at WSSU. “As they’ve gone about their work, these two organizations have been bound together in mutual support to achieve a strong, just and prosperous community.”

Over 125 years, RJRT and its executives have given back millions to WSSU, dating back to a $500 gift from R.J. Reynolds in 1891 that helped establish Slater Academy, the predecessor of WSSU.

The donation supported a luncheon on Sept. 28, WSSU’s anniversary, and an event held in downtown Winston-Salem in conjunction with WSSU’s Homecoming Parade.

1901: Reynolds and WSSU founder S.G. Atkins collaborate to operate a hospital for Black residents in Winston and Salem.

1969: RJRT establishes the Reynolds Scholastic Achievement Program with $368,000 in grants from RJRT, the largest single contribution to a black public college by a corporation.

1969: Marshall T. Bass, the first Black manager at RJRT, first serves as chair of WSSU Foundation Board of Directors. Bass continued his relationship with WSSU through his nearly 30-year career at RJRT.

1981: RJRT gives $1 million to WSSU, the largest gift ever to a historically Black college or university.

1984: The university celebrates the official opening of the R. J. Reynolds Center, housing the department of business.

2005: RJRT pledged $1.25 million to The Campaign for Winston-Salem State, which supported scholarships and an endowed professorship in the school of business and economics.

2015: The Reynolds American Foundation provides $1.5 million to support the establishment of the Student Success Center at Hill Hall and fund additional scholarships.