Winston-Salem State University (WSSU) has come a long way since it was founded by Simon Green Atkins as Slater Industrial Academy in 1892. Over the past 125 years, WSSU has evolved from a one-room frame structure into an academic powerhouse with more than 39 buildings located on 117 acres.

In celebration of Black History Month, follow us as we take you on a walking tour of some of the sites on campus. 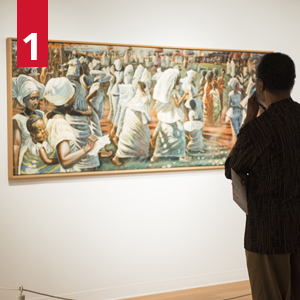 The Diggs Gallery offers one of the largest exhibition spaces dedicated to the arts of Africa and the African Diaspora in North Carolina. The gallery was identified by the Smithsonian as one of the nation’s best regional facilities for exploring contemporary African art. Diggs is located on the lower level of C.G. O’Kelly Library. It is named for James Thackeray Diggs Jr., a 1934 graduate of Winston-Salem State. He was a painter, and a professor at the university for over 40 years. As you leave Diggs Gallery, please take notice of the hand rail that runs from the parking lot of the gallery. It is the only remnant of Fries Auditorium, which was built in 1936 and acted as the campus auditorium until its collapse in 1970. 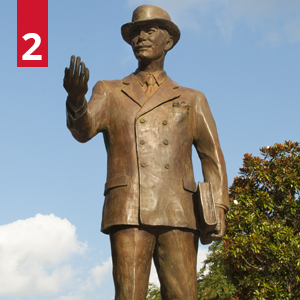 A statue of Dr. Atkins was erected in front of C.G. O’Kelly Library in 2005 after the installation of the pedestrian mall. Elizabeth Heath King, who also created the R.J. Reynolds statue on North Main Street in Winston-Salem and hundreds of others, was the sculptor. 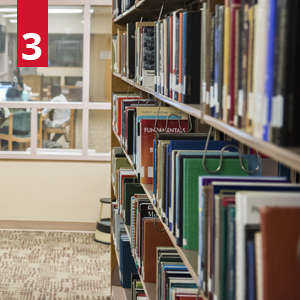 WSSU’s library was built in 1967. It is named for Cadd Grant O’Kelly, who served as the second president of Slater Industrial Academy. The left side of the building is the original structure. After the collapse of the Fries Auditorium, the library was renovated. More additions were made after the renovations making the library what it is today. Artist John Biggers, a North Carolina native, agreed to paint two murals to be hung in the newly added atrium of the library. Winston-Salem Delta Fine Arts Center presented the murals to the university on March 28, 1992. The Biggers murals, named Origins and Ascension, are located on the west wall of the atrium. 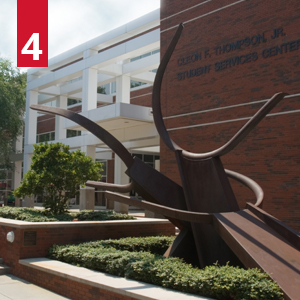 The student services building was named for Dr. Cleon F. Thompson, who served as chancellor from 1985-95. Thompson’s tenure as chancellor is characterized as “A Decade of Development.” This center was built to house a student union and a dining hall, in addition to all student-related administrative offices. Today, the Thompson Center breezeway is one of the most popular student hangouts on campus. The center is still home to the campus dining hall and several student-related services as well as the university bookstore, managed by Barnes & Noble College, the copy center and the University Post Office. The Thompson Center is located on the former site of the Slater Hospital. 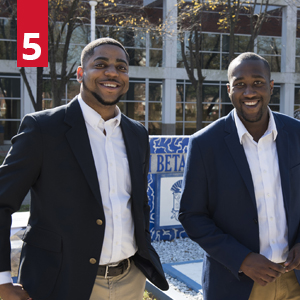 Located in the front of the Thompson Center and to the right of O’Kelly library, the Greek plots are a physical representation of the Black Greek Letter Organizations at WSSU. The area is divided into small plots of land, one for each Greek organization on campus. Most of these organization have been in existence for more than 100 years and began as civil action groups on Historically Black Colleges and Universities (HBCU) campuses. The area acts as an outdoor space where students and alumni, who are members of these organizations, can assemble, host events, and celebrate their organizations. 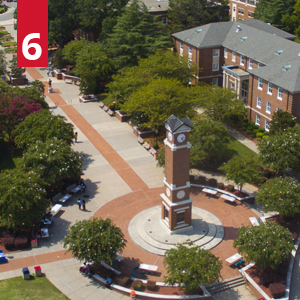 The pedestrian mall and clock tower were added to campus in 2004. To make room for the walkway and clock tower, Colson Hall and the Alumni Building were taken down. The clock tower displays quotes from: Simon Green Atkins; Poet and Civil Rights Activist Maya Angelou; Chancellor Harold Martin, the seventh chancellor of WSSU; and Minister Benjamin E. Mays, author, and civil rights leader. Bank Street, which ran where the walkway now stands was closed to traffic, making the area a pedestrian mall. During the school year, this area is one of the most popular places on campus for students to socialize. 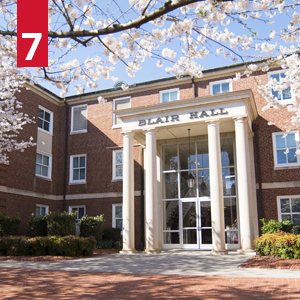 Blair Hall was built in 1938. It is named for original Board of Trustee member William Blair. This building replaced a large fish pond and bandstand. Blair Hall originally served as home to the library and the administrative building. This set-up gave students the unique experience of studying across the hall from the president of the school. Presently, Blair Hall still serves as the administrative building, where the Chancellor’s office remains located. 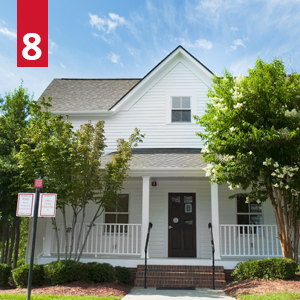 This is the home Simon Green Atkins built around 1893. He and his family lived here for more than 20 years. In 2002, the house was moved three blocks away to its current location and renovated. It is currently home to Alumni Engagement and the Passport Office. 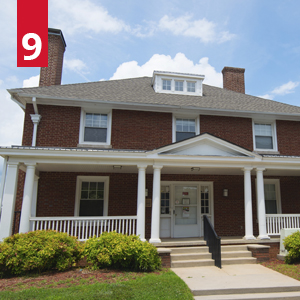 The Alumni House, across the street from the historic S.G. Atkins House, was built for Dr. Atkins and his family in 1924. WSSU’s presidents and chancellors lived in the home until the mid-1990s, when a new home was obtained for the chancellor, and the building became the Alumni House. Currently, it is home to the Office of Integrated Marketing and Communications. 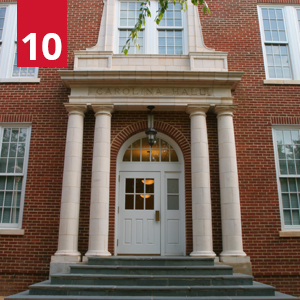 Carolina Hall is the oldest classroom building on campus. The home to the College of Arts, Sciences, Business and Education was built by students in 1925 with bricks created from the campus brick yard. Carolina Hall was the main academic and classroom setting on campus and home to the first library. As you walk inside, you’ll be welcomed by this quote from Dr. Atkins: “Education is not a question of mechanics; it is rather a question of ethics and morality. Education is primarily an effort to realize in man his possibilities as a thinking and feeling being.” 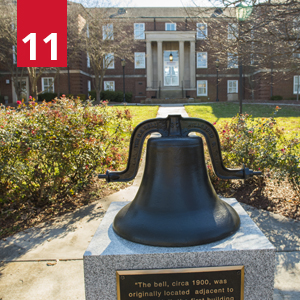 The historic lawn between Blair and Carolina halls is home to the historic bell, which dates to 1900 and was used to signal when it was time to change classes or attend other campus activities. Today, this area is being reimagined as a Zen Zone, a quiet space for students, with hammocks, updated park benches and a gazebo. 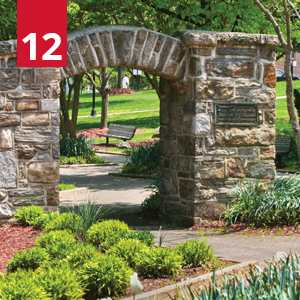 The archways were built in the early 1930s and once served as the entry point to the west end of the campus. As a memorial to Atkins in 1936, the graduating class had plaques added to the arches honoring Atkins and his wife Oleona Pegram Atkins, who taught at WSSU and was instrumental in the founding. Since 2009, a new class of students are escorted through the archways to symbolize their induction into the Ram family and commitment to the legacy left by Dr. Atkins. The arches also are symbolized in WSSU’s new logo. 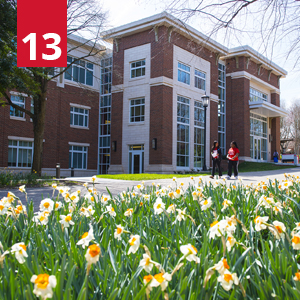 The 30,000-square foot building serves as a “one stop shop” for student success. Named for James Hill, an educator and Board of Trustees member who played a key role in fundraising to support Slater Industrial Academy, the former science building was refurbished in 2012 as a part of WSSU’s “Restore the Core” initiative. The Student Success Center offers a collaborative space for students to receive academic assistance, learn about internships and jobs, pursue study abroad opportunities, receive technology assistance, attend seminars and grab a cup of coffee and a bagel from Einstein Bros. Bagel. 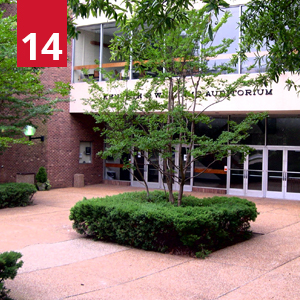 This 1800 seat auditorium, built in 1975, five years after the collapse of Fries auditorium, is named for Chancellor Kenneth R. Williams, who was chancellor during its construction. Chancellor Williams proposed that a sculpture also be included in the construction plans. The Hanes Foundation funded the sculpture garden, also named for Williams, and a national competition was launched to find the first sculpture piece. The twelve-foot stainless steel sculpture, currently overlooking the auditorium, was created by finalist Mel Edwards of New York, and installed in 1983. A second competition was held in 1984, which ended with three finalists. A three-part stone work by Beverly Buchanan and a wood sculpture by Roberto Bertoia were installed in 1985. A large cor-ten steel sculpture by Tyrone Mitchell was placed in the courtyard of the new business school, fall of 1986.