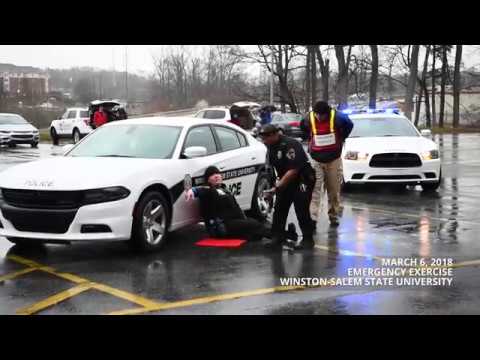 Nearly 200 emergency personnel, volunteers, and WSSU faculty, staff and students participated in the emergency exercise, which was staged at the Bowman Gray Stadium Fieldhouse.

The exercise included a simulated active shooter with mass casualties, a fully-operational emergency operations center and concluded with analysis and a media briefing.

“When you have a staff that's trained, and understands how to respond to these types of situations, it always makes it better for our students,” said Patricia Norris, chief of police and director of safety for WSSU. “Granted, we don't ever want anything like this to happen, but if it does, our folk are prepared and trained to handle those types of situations.

During the exercise, first responders and other resources were deployed as if an actual incident was occurring. Norris said the primary objective of the exercise was to test the Emergency Operations Plan (EOP), the university’s response to an active assailant incident on campus, and the Chancellor’s group on decision-making and communicating with the Emergency Operations Center.

The following agencies participated alongside WSSU in the exercise:

This exercise, part of a larger emergency management training initiative, provided an opportunity for information sharing and coordination with agencies. The exercise was funded through a $30,000 grant from the University of North Carolina System. This is WSSU’s third full-scale exercise since 2013.