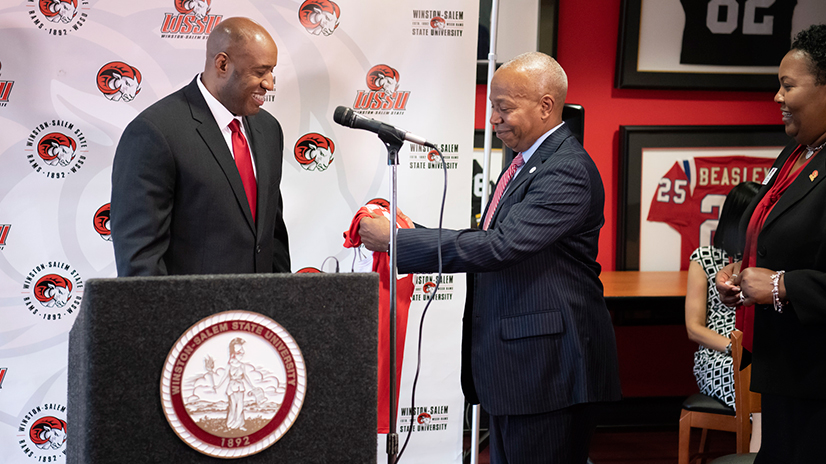 WSSU Chancellor Elwood L. Robinson presents a jersey to Cleo Hill Jr. during a press conference on May 21. Hill will become the ninth men's basketball coach at WSSU. Hill was introduced by Tonia Walker (right), director of athletics.

Winston-Salem State University (WSSU)  will look to its past to forge its future with the announcement of Cleo Hill Jr. as the head coach of the Rams men's basketball program.

"There were 104 applicants for the position, which speaks to the excitement around Winston-Salem State University basketball," said WSSU Director of Athletics Tonia Walker. "After a thorough search process, there was no doubt that we have found the best candidate to usher in a new era for men's basketball. Cleo Hill Jr. has been successful at nearly all levels of college basketball—as a player, assistant coach, and head coach."

Hill was introduced as WSSU's ninth coach during an introductory press conference on Monday, May 21.

Hill had a successful run as the head coach at Shaw University from 2008-15, where he led the Bears to a 116-67 record in seven seasons. In 2011, he guided the Bears to their first Central Intercollegiate Athletic Association (CIAA) championship and an appearance in the NCAA Division II Atlantic Region Tournament.

Prior to leading the Shaw, Hill spent five years as the head coach at Cheyney University where he led the Wolves to a 55-67 record, including a 23-8 record in the 2003-04 season. The Wolves also saw a pair of appearances in the NCAA Division II playoffs.

In addition to his experience as a head coach, Hill spent time as assistant coach at the University of Nebraska.

As a player at North Carolina Central University, Hill was selected to the South Atlantic Region All-Tournament team as a senior and is still among the school's all-time leading scorers.

A native of Orange, New Jersey, Hill is the son of Rams basketball legend, the late Cleo Hill Sr., a 2017 National Collegiate Basketball Hall of Fame inductee. Hill Sr., a 6-1 guard, scored 2,488 points in his career at WSSU, second only to Earl "The Pearl" Monroe. He was drafted eighth in the 1961 NBA draft by the St. Louis Hawk, the first player from an HBCU drafted in the NBA first round. Hill's jersey was officially retired in 2017 and is in a place of honor at WSSU's C.E. Gaines Center.

Cleo Hill Jr. will take over one of the most storied basketball programs in NCAA basketball. In its 70-year history, WSSU has won 11 CIAA titles and became the first historically Black college to win an NCAA basketball championship in 1967.

Tickets are on sale now for WSSU Athletics' All-Access Card, which includes admission to all home 2018-19 basketball, baseball and football games for as low as $100. For more information, visit www.wssu.edu.tickets.

For more information on Rams men's basketball, contact the WSSU Office of Athletic Media Relations at 336-750-2143 or log on to www.WSSURams.com. 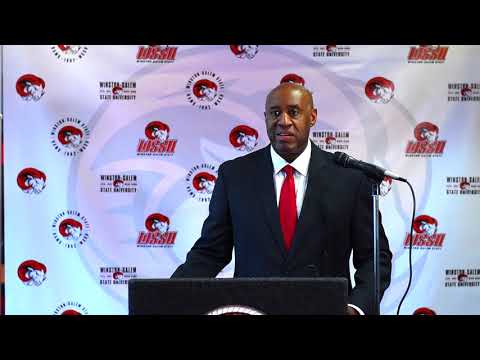