FAMU administrator named dean of The College at WSSU

After a national search, Dr. Darryl Scriven, chair of the Department of Visual Arts, Humanities and Theatre and an associate professor of philosophy at Florida A&M University (FAMU), has been named the dean of the College of Arts, Sciences, Business and Education at Winston-Salem State University. His appointment is effective July 1, 2018.

Scriven, who will also serve as the John W. And Anna H. Hanes Distinguished Professor in Humanities at WSSU, was a Fulbright Scholar to Morocco and Tunisia, and has taught at Wilberforce University and Southern University. 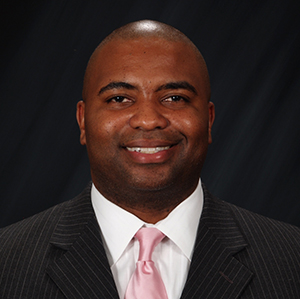 “Dr. Scriven’s entire career exemplifies the power and promise of a liberal education,” said WSSU Chancellor Elwood L. Robinson, who announced the appointment in an email to faculty and staff on Friday, May 4. “I believe that the depth and breadth of his experience will be a true asset to WSSU and will help us achieve the goals put forth in the WSSU Strategic Plan for 2016-21.”

Scriven earned bachelor’s degrees in philosophy and religion, and mathematics from FAMU. He went on to earn master’s and doctorate in philosophy from Purdue University.

From 2009-11, Scriven was the associate director of education and director of the Bioethics Honors Program at the Tuskegee University National Center for Bioethics in Research and Health Care. From 2011-14, he was the co-owner of Rolling Video Games of Maryland.

Since 2014, he has served as chair and associate professor of philosophy at FAMU, where he has led a multidisciplinary department with four major programs, five minors and 25 faculty members.

Scriven is married to Dr. Latricia Edwards Scriven. They have three children, Destini, Faith and Samuel

Scriven will fill a vacancy created when Dr. Corey D.B. Walker left WSSU last June to become dean of the Samuel DeWitt Proctor School of Theology at Virginia Union University. Dr. Doria “Kathy” Stitts, who has served in the position on an interim basis for the past 10 months, will remain interim dean until Scriven is on board.

The College at WSSU offers over 40 undergraduate majors and minors as well as graduate programs. The College is comprised of five faculties, which organize and govern the intellectual affairs of 19 academic departments, eight research and teaching centers, the Diggs Gallery, and a number of interdisciplinary academic initiatives.