There are few alumni better qualified to express what it means to be a Ram than Henrietta Hatton Clark ’38, who is believed to be Winston-Salem State University’s (WSSU) oldest living .

Clark, who turned 104 in September, she’s says she is a proud Ram and has good memories of what she has done.

“I tell my kids if you have a chance, go to Winston-Salem,” Clark says. "... It carried me to things that I never would have done. Years ago, they thought it was a small school, but now to Winston is outstanding the rest of them.”

Clark, a retired teacher, was a student at Winston-Salem Teachers College (WSTC), now WSSU, while Francis Loguen Atkins, son of WSSU founder Simon Green Atkins was president. She graduated the same year WSSU’s alma mater “We Go Forth” was penned and the alumni association was created. Her classmates included Lorraine Hairston Morton, the first African American mayor of Evanston, Illinois.

As a student, Clark played basketball on the women’s team. During the summer, Clark received a surprise visit from WSSU’s 2018-19 women’s basketball team, and WSSU Chancellor Elwood Robinson and his wife, Denise Robinson.

Take a look Clark shares memories of her time at WSSU. 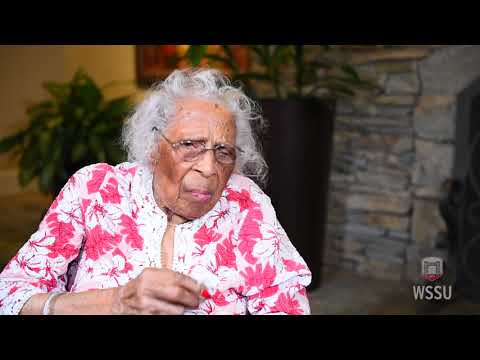