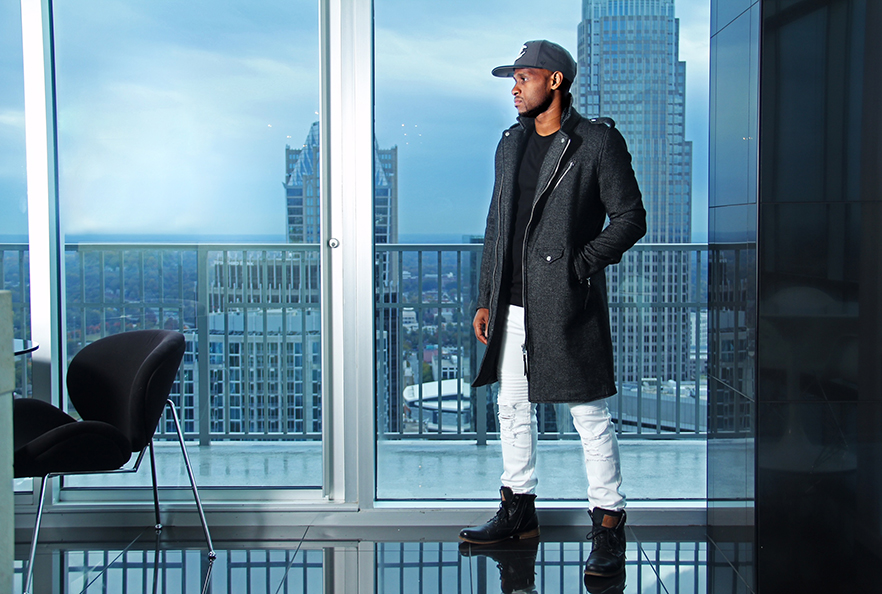 Oliver Crooms IV '07 is the president and founder of the inaugural Carolina Film Festival, which will be held in Charlotte on Oct. 13.

The inaugural Carolina Film Festival will be presented in Uptown Charlotte on Oct. 13 with screenings of nominated films in six categories.

Crooms talks to WSSU News about his time at the university, the new festival and his career.

What has you most excited for the inaugural Carolina Film Festival?
The fact that we are blessed to have special guests who are trailblazers in the film industry. Marcus Small, who is also a WSSU graduate, has produced projects for P. Diddy, T-Pain and other Grammy-winning artists. Marcus has also directed TV shows for Lifetime, MTV, Bravo and others. Eric Small is a movie producer who has produced films that have been featured on Netflix, BET and other major platforms. Joslyn Hall is an actress on the FX’s critically acclaimed TV show “Atlanta” featuring Donald Glover. Each will be a part of our Q&A panel where the audience will be able to ask them questions and learn from their experiences.

What’s different about this festival?
The Carolina Film Festival is a mobile event. This is the reason why I called it “Carolina” Film Festival. For our inaugural year, we are having the event in my hometown of Charlotte. However, we plan to move our festival to different cities in the Carolinas to bring the film community closer together. Another way our festival is different is the type of categories we have. Our “Best Drone” category, for example, is a unique category in which any film that has at least 50 percent of its footage shot with a drone can be in consideration.

How did a music business major end up president of a film festival?
After college, I was on the set of a music video one day, and it really inspired me how the director managed the project. It made me realize that, not only do I have a creative ear, but I also have a creative eye. I then studied and practiced the craft of filmmaking, and years later, developed a love for filmmaking. I have been to enough film festivals to have an understanding of how it works so it led to me starting my own.

Could you describe yourself in five words?
That’s a tough one but what I’ll say: gentleman, driven, ambitious, creative, and loved.

What advice would you offer to a WSSU student who is interested in getting into the entertainment field?
I’ll say surround yourself with people who are smarter and more successful than you in this field. Respect your craft, continue to practice, and learn more in it even after graduation. Don’t be ashamed to take on smaller projects and build up to where you want to be. Don’t confuse destructive criticism with constructive criticism.

How do you stay fresh when your inspiration is waning?
For music or film, I like to experience projects from artists that I respect. Directors like Christopher Nolan and Ryan Coogler tend to inspire me every time I see their films.

What WSSU professor most inspired you at WSSU?
My band director Dr. Michael Magruder (chair of the Department of Music and director of bands) was such an inspiration to me. His door was always open to anyone who needs to talk about anything. Dr. Magruder was hilarious during band rehearsals, but at the same time he challenged us and made us better musicians. Dr. Magruder was also a shining example of an educated black family man who loves his family and students.

Since graduating from WSSU, you have worked as a music producer, film director and now president of a film festival. What would you like to do next?
The funny thing is when I graduated from WSSU I had no idea that I would be involved in the film industry. I want to keep my focus on these three aspects of my life and make sure that Carolina Film Festival continues to grow each year so that it will one day be one of the biggest and most respectable festivals in the world. Where major film studios like Fox Searchlight, Sony, WB and others will send their films and prime candidates for Oscar consideration to our festival just like how they do for the Sundance Film Festival.

WSSU's Department of Music offers a bachelor's concentration and minor in music business. The program, unique to North Carolina HBCUs, helps students learn the key roles within the industry and how each generates income from their work. Music business graduates often enter careers in production, music licensing, and music manufacturing.