WSSU enrollment is highest since 2014 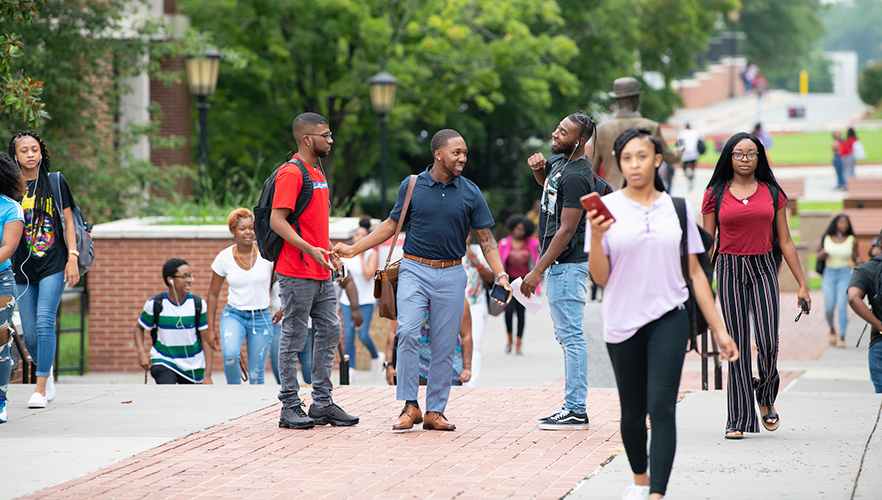 WSSU students greet each other on campus during the first day of classes on Aug. 20.

Winston-Salem State University (WSSU) is reporting its highest overall enrollment since 2014, according to the university’s Office of Institutional Assessment and Research’s fall report.

Fall semester enrollment  is up 1.8 percent overall over fall 2017, with 5,190 graduate and undergraduate students.

“We are seeing positive growth that aligns closely with the university’s five-year Strategic Enrollment Management plan, which aims to increase overall enrollment to 6,000 by 2022,” said Joel Lee, assistant vice chancellor for enrollment management.

WSSU’s transitional Doctor of Physical Therapy (t-DPT) program, which debuted in August 2017, showed the largest increase, growing from four to 32 students this fall. In addition to U.S. students, the online program – for physical therapy students who are ready to advance their careers – welcomed students this fall from Egypt, India, the Philippines and Turkey.

University efforts to increase the number of minorities in its allied health graduate programs also are paying off. The percentage of African American graduate students has increased 24 percent compared with fall 2017. African Americans now make up 42 percent of graduate and professional programs enrollment, up from 37.7 percent in 2017.

Contributing to the increase are:

Another factor this fall is the opening of H. Douglas Covington Hall. The new freshman living/learning community accommodates 291 students, helping to open up additional space for upperclassmen and on-campus transfer students.

This fall, there was a 60 percent increase in the percentage of transfer students living on campus.