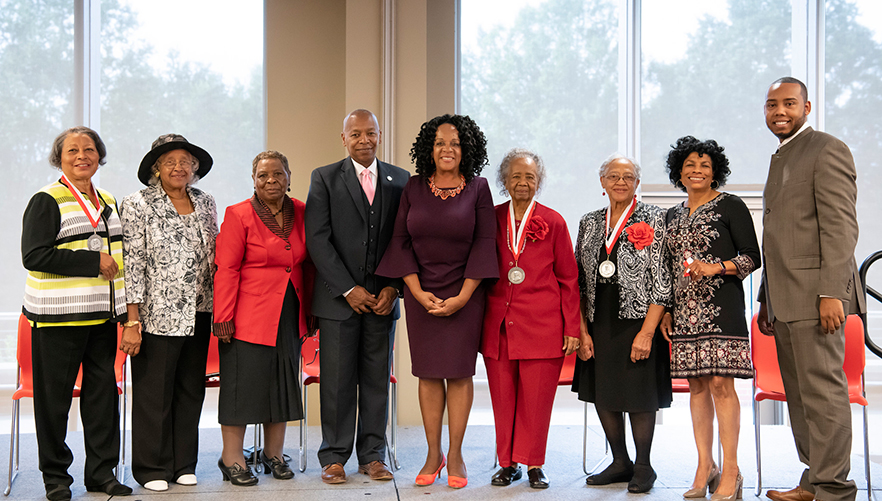 Winston-Salem State University's School of Health Sciences (SOHS) honored six individuals who have made a positive impact on the health and wellness of the residents of East Winston during the Second annual Healthcare Legends of East Winston event on Wednesday, Oct. 17.

“We are pleased again to recognize legends who made healthcare possible at a time in our history when African American residents had very limited access to quality services,” said Dr. Peggy Valentine, SOHS dean. “Through this annual event, our hope is to instill a sense of pride in the community surrounding WSSU and to shine a light on the early efforts and groundbreaking work to reduce racial and ethnic health disparities.”

The luncheon also included the first of a series of interactive conversations with early School of Health Sciences alumni and faculty. Participants this year were: honorees Andrews and Webster, and Lenner P. Jeffries, a 1959 nursing graduate.

The presenting sponsor for the luncheon was Northwest Area Health Education Center with sponsorship by the WSSU National Nurses Alumni Association.

This was one of a series of events hosted by SOHS for WSSU’s Homecoming. Earlier in the week, WSSU partnered with AARP North Carolina to present a free community screening of the PBS documentary “The Power to Heal,” which focuses on how Medicare and the Civil Rights Movement worked together to change America. Following the screening, part of a statewide tour, local panelists focused on health disparities today.

A bold past. A brilliant future.
For 126 years, Winston-Salem State University has fostered the creative thinking, analytical problem-solving, and depth of character needed to transform the world. Rooted in liberal education, WSSU’s curriculum prepares students to be thought leaders who have the skills and knowledge needed to develop innovative solutions to complex problems. WSSU is a historically Black constituent institution of the University of North Carolina with a rich tradition of contributing to the social, cultural, intellectual, and economic growth of North Carolina, the region and beyond. Guided by the motto, “Enter to Learn. Depart to Serve,” WSSU develops leaders who advance social justice by serving the world with compassion and commitment. 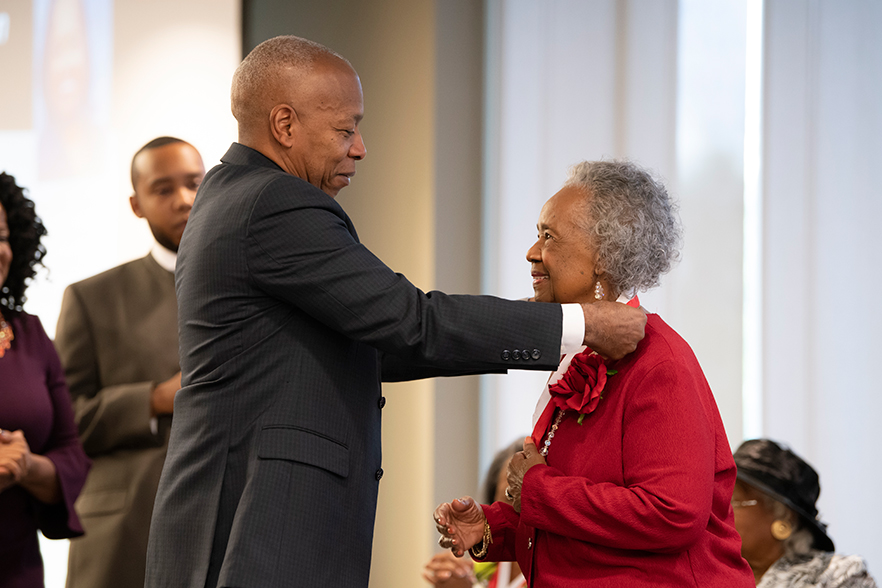 Chancellor Elwood L. Robinson recognizes Gwendolyn Andrews with a medallion as a 2018 honoree of the Healthcare Legends of East Winston on Oct. 17.