Robinson: WSSU is creating the next workforce

“We really pride ourselves on being a regional institution, and by educating and creating the next workforce – that’s what we do here,” Robinson tells Higher Education Works Foundation. 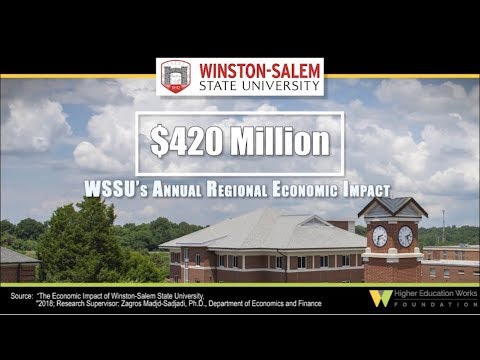 According to a recent study, WSSU generated more than $230 million in total economic impact into the North Carolina economy.

Robinson says that the university’s impact is actually higher than that.

A new study completed by a WSSU professor suggests that WSSU’s annual regional economic impact is probably somewhere around $420 million, he says.

“It’s because this professor took into consideration what our alumni are doing … That these folk works, they earn a living, they pay taxes, they have an overall economic impact on the region,” Robinson says.

WSSU has nearly 12,000 alumni living in about a 10-county area in and around Winston-Salem.

“We’ve looked at where students are doing their internships and we have calculated the economic impact of those students on the region. We believe it’s somewhere around a $1.2 million economic impact… That’s quite significant,” Robinson says.

Robinson recently sat down with Higher Education Works for an in-depth video interview. Other topics included: