What people are saying about proposed upgrades to Bowman Gray Stadium

The renovations and improvements, which must be approved by the Winston-Salem City Council, would provide an enhanced fan experience for Winston-Salem State University (WSSU) football and for Bowman Gray racing.

Here’s what officials and media are saying about the proposal.

“This will create a win-win-win for the university, the city and for Bowman Gray racing. The enhancements will create a home stadium atmosphere for our student-athletes, alumni fans. Further, this will be accomplished without committing student funds.”
– Elwood L. Robinson, WSSU chancellor

“Bowman Gray Stadium is part of our city’s heritage and an important asset. These improvements will keep it viable for decades to come.”
– Allen Joines, Winston-Salem mayor

“This is important because the city had a responsibility to make an investment in Bowman Gray no matter what. That takes the financial responsibility off the university I think the university; the alums and the students get a great asset at the end of the day.
– Derwin Montgomery ’10, North Carolina House of Representatives, District 72

“This is important for the City of Winston-Salem because it is important for the community that it rests in. We talk all the time about making the city a better place to live, work and relax. Bowman Gray is a part of where working families come to relax on the weekend. These improvements say that we support, not only Bowman Gray racing, but particularly Winston-Salem State University and their contribution to the country, to the state, and to our local community. We’re showing that with not only our but with our money.”
– James Taylor, Winston-Salem City Council member, Southeast Ward

“It’s important to us that we have a great place for our fans to come enjoy the games. They can enjoy the facilities and enjoy the atmosphere. The things they are going to put here, from redoing the field to just WI-FI, are going to make the fan experience totally different.”
– George Knox, interim director of athletics, WSSU

“There is nothing more exciting in this world than something new. Students like new things. Coaches like new things. This gives us another stepping stone regarding our recruiting tools and tactics. Now we can tell people that as nice as this facility is, it’s going to get even nicer in the next few years.”
– Kienus Boulware, WSSU head football coach

“I think this is important because this is an 80-year-old facility and we need to get with the times. I think the city is realizing that. They have a gem in a dual-purpose facility. Racing is good for the community. Winston-Salem State is good for the community. So everybody just comes together, and it makes it better for everyone.”
– Gray Garrison, promoter, Bowman Gray Racing 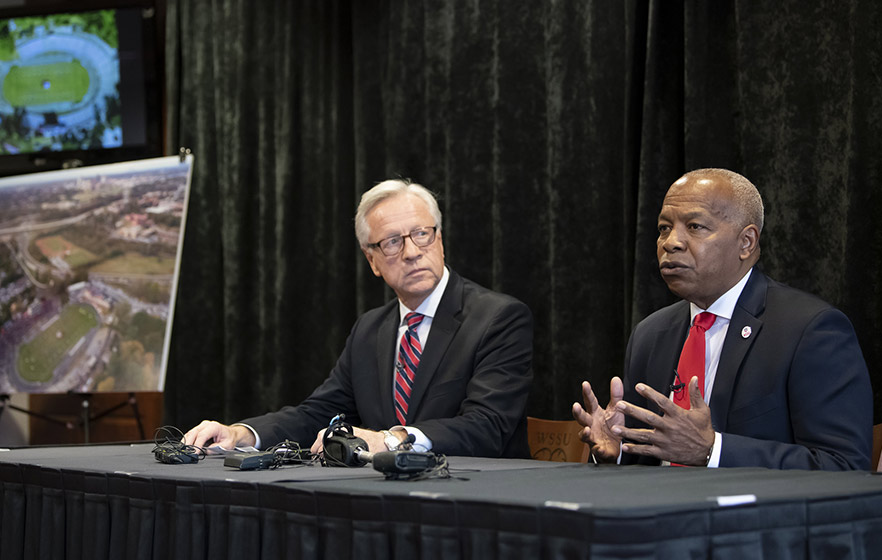