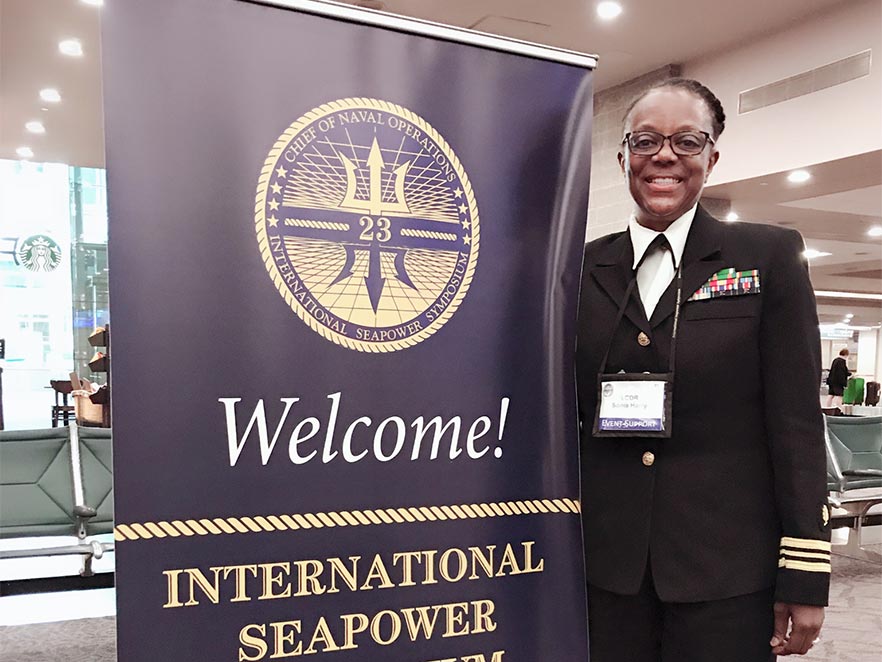 Dr. Sonja Harry, associate professor of social work at WSSU, at the International Seapower Symposium at the Naval War College in Newport, Rhode Island, in September 2018.

Harry, a native of Covington, Louisiana, joined the Navy Reserves at the suggestion of her sorority sister.

“I joined because I happened to meet up with one of my sorors who was in the Navy while she was asking another friend about joining,” Harry says. “The friend said, ‘Why don’t you tell Sonja, maybe she’s interested.’ So after our conversation, I started looking into it. The process took about two years.”

Harry began the process of becoming a commissioned officer in 1996.

“I submitted my officer application, and it was denied because Congress didn’t have the funding,” Harry says. “So I submitted it again the next year, and it was accepted, and I was commissioned Nov. 21, 1998, nearly 20 years ago.”

Harry, a lieutenant commander in the Navy, who is also a social worker in the military, says she uses her leadership training and military experiences in her teaching methodology.

“You receive very good leadership training in the military, and you are expected to assume leadership roles,” Harry says. “I teach social work, so I’m allowed to not only bring in a lot of experiences and examples of social work into the but also examples of the whole organization, policies and following the chain of command. All of that into my day to day work.”

As a reservist, Harry has been deployed twice. She spent 18 months in Bahrain after 9/11 and later went to Kuwait for almost a year. She says her military duties have allowed her to meet people from several different countries.

“Recently, I was in Newport, Rhode Island, for two weeks. When you are in the reserves, regardless of the branch, you have to do annual training,” Harry says. “The Naval War College which is located there had a symposium where heads of navies from 106 countries came together to discuss all sorts of naval and maritime world issues. I met a lot of people from hundreds of different countries.”

Harry’s military commitment doesn’t prevent her from supporting students in WSSU’s Department of Social Work, which is the winner of the 2018 HBCU Digest Award for Best Social Work Program.

“Dr. Harry is an exceptional member of the faculty, as she manages her military commitments along with providing unwavering support to our department and university,” says Yolanda Meade Byrd, associate professor of social work and chair of the Department of Social Work. “She is the epitome of a servant leader and is a consistent example to our social work majors and alumni.”

Outside the classroom, Harry is usually still working, grading papers and talking with students. In March, Harry spent this year’s spring break with students and faculty in India to help launch a new study abroad program for social work students.

Harry often meets with students to help them identify their goals and ensure that they are prepared through a WSSU social work program initiative called RAMREADY that she helped to implement.

In her spare time, Harry enjoys sleeping, cooking, working out, talking on the phone with friends, and spending time with her husband, who also works at WSSU.