WSSU Tradition: Anthem ‘Get Up,’ more than a song

By Sydney Bowman'18 | For Archway 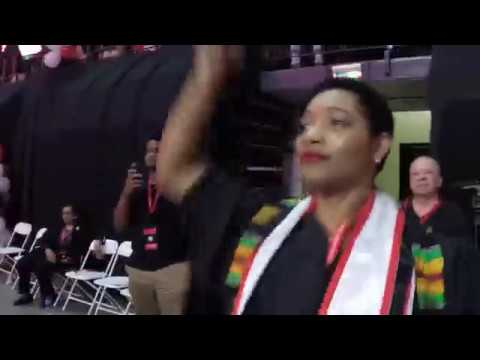 There are few things that will bring Rams to their feet faster than hearing the Red Sea of Sound play the song “Get Up.”

What you may not know, though, is the song was composed by a former member of the band.

Christopher Michael Hinson composed the song as a student and member of the marching band in 2000, drawing inspiration from go-go music, a popular music subgenre that originated in his hometown of Washington, D.C.

Although Hinson says he believes the band’s original composition has given it an edge over the competition for years, he says he never expected his song to become a WSSU tradition.

“When I wrote ‘Get Up,’ I didn't think that it would have the longevity that it does today,” Hinson says. “I am the type of composer who will write what he hears in his heart, and not necessarily think about the consequences afterward.”

“Get Up” has become more than just a spirit song. It’s performed at some of WSSU’s biggest events, including Ramdition, the freshmen orientation, and at the close of commencement.

Gregory Hughes, a senior drum major computer science major, says the song brings a different kind of feel when the band performs it.

“It’s a song that gets people up on their feet, and you just know where home is when you feel that song,” says Hughes. “It brings fun and exciting energy. It’s all about positivity no matter what the predicament is right then and there.”

It is known throughout the WSSU community as a symbol of Ram pride, Hughes says.

“It is a song that has been passed down and people have different emotions towards it,” Hughes says.

Here are three "Get Up" performances that are uniquely WSSU:

For Vanity Oakes ’14 and Cornell Jones ’12, their love for WSSU runs so deep they had the RSOS perform “Get Up” at their wedding reception. The song was used to introduce the bride, a former Miss WSSU and Miss CIAA. Jones, a former Mr. WSSU who now works for ESPN, “it’s only right to have @_redseaofsound help introduce my bride.”

To open the 2017 Chancellor’s Achievement Awards, the organizing committee asked staff to cheer and dance along to “Get Up.”

WSSU’s Integrated Marketing Communications also has used the video as a soundtrack in a number of promotional videos. Most recently, it was used to highlight ways to get involved on campus.