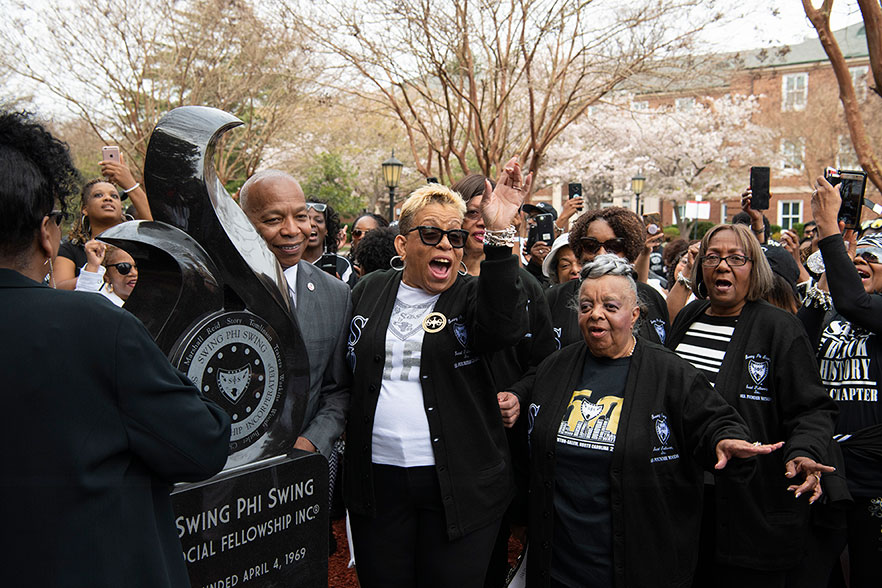 WSSU Chancellor Elwood L. Robinson joins the Swing Phi Swing founders for the dedication of a new monument honoring the organization on March 30.

Fifty years ago, 12 female students at Winston-Salem State University (WSSU) dared to do something different.

Today, the organization they founded on WSSU’s campus – Swing Phi Swing Social Fellowship – has more than 50 chapters across the nation and thousands of members.

The founders of Swing Phi Swing, along with hundreds of members of the organization, returned to WSSU on Saturday, March 30, to commemorate the 50th anniversary and to dedicate a monument at the spot where the organization first started in 1969.

With cheers and singing from hundreds of Swing Sisters, the 10 living founders cut the ribbon on the monument just outside C.G. O’Kelly Library and near the clock tower.

“With the unveiling of this monument, it's now in the annals of the history of Winston-Salem State University,” said WSSU Chancellor Elwood L. Robinson. “You have your own place.”

The dedication was part of Swing Phi Swing's 50th anniversary convention. More than 600 Swing Sisters along with members of their brother organization, Groove Phi Groove, were in Winston-Salem for the event.

Earlier in the week, Swing Phi Swing announced it is giving back to its founding university with a $25,000 donation. The donation will establish the Supporting Women in Need of Growth (SWING) Non-endowed Scholarship Fund, which will provide need-based scholarships for female students at WSSU who demonstrate community service.

In 1969, WSSU had an active Groove Phi Groove chapter, a male organization that was founded at Morgan State College in 1962. Several female students asked why the organization didn’t have a sister organization.

Signs were posted around campus, and a brainstorm meeting was held in early 1969. After the meeting, it was agreed to hold a first meeting. A dozen female students showed up. They started from scratch, and pledged under Groove Phi Groove, developing learning materials based on the brother organization.

On April 4, 1969, the one-year anniversary of the assassination of Dr. Martin Luther King Jr., 12 ladies crossed and became members of a new organization, Swing Phi Swing, an acronym for “Sisters With Interest Never Gone, Promoting Higher Intelligence, Supporting Women in Need of Growth.”

“We wanted to challenge the norm of Greek life and to do something different,” said Beverly Dorn-Steele '72, one of the founders.

Within a year, Swing Phi Swing had spread to campuses around the country. “It was a domino effect. It took off like wildfire,” Dorn-Steele said. “People were asking, ‘Who are these bold, black women.’ ”

She said Swing Phi Swing was the first female organization on campus to step. Their focus on sisterhood also was unique.

Today as then, the organization focuses on promoting leadership, academic excellence, and community consciousness.

The convention included events in downtown Winston-Salem and on WSSU’s campus starting on Wednesday, March 27, and continuing through Sunday, March 31. Events at WSSU included a youth empowerment summit with 100 students from Winston-Salem/Forsyth County Schools and a block party. 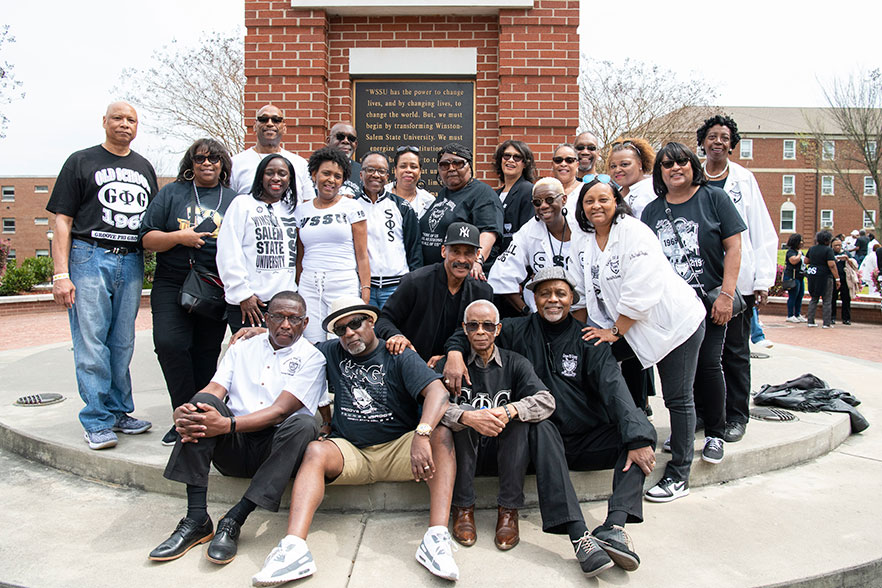