From bold new caps and gowns to a degree 70 years in the making, Winston-Salem State University’s (WSSU) 2019 Commencement Ceremony on May 10 was one for the record books.

Here's a look at the 10 boldest moments from WSSU's commencement.

For the first time, WSSU’s undergraduates took the stage in cap and gowns that highlight the university’s bold colors, red and white. The gowns, with red and white accent trim, created a sea of red on the floor of the coliseum. 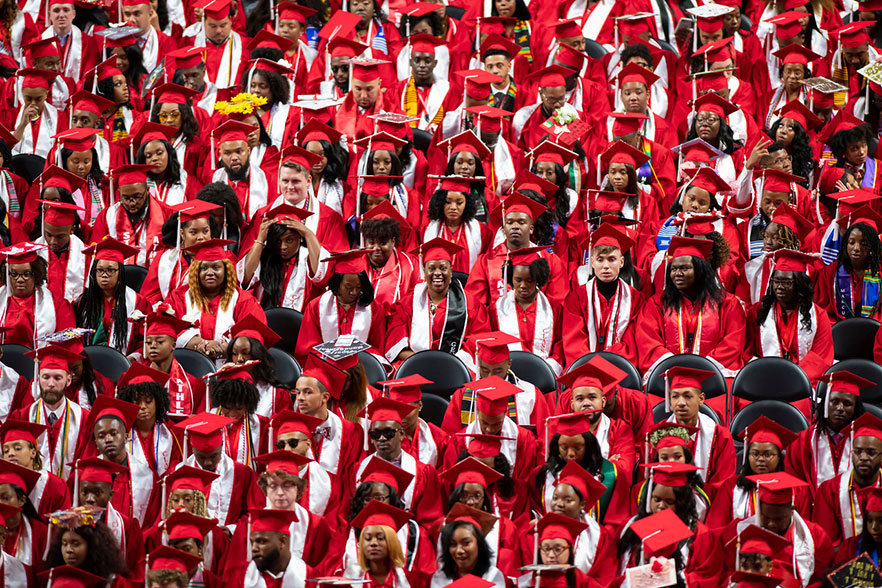 Graduates form a sea of red on the floor of LJVM Coliseum.

9. A Degree and a Life Partner

Valarie Gaines and Collin Spratt-Wilks first met in middle school in Charlotte. They started dating in 2010, and continued their journey as students at WSSU. On Friday, they graduated together, Gaines with a degree in therapeutic recreation and Spratt-Wilks with a degree in exercise science. Following the ceremony, with dozens of their family members there, Spratt-Wilks surprised his lifelong love by getting down on one knee, opening up a small box, and asking her to marry him. She said yes! 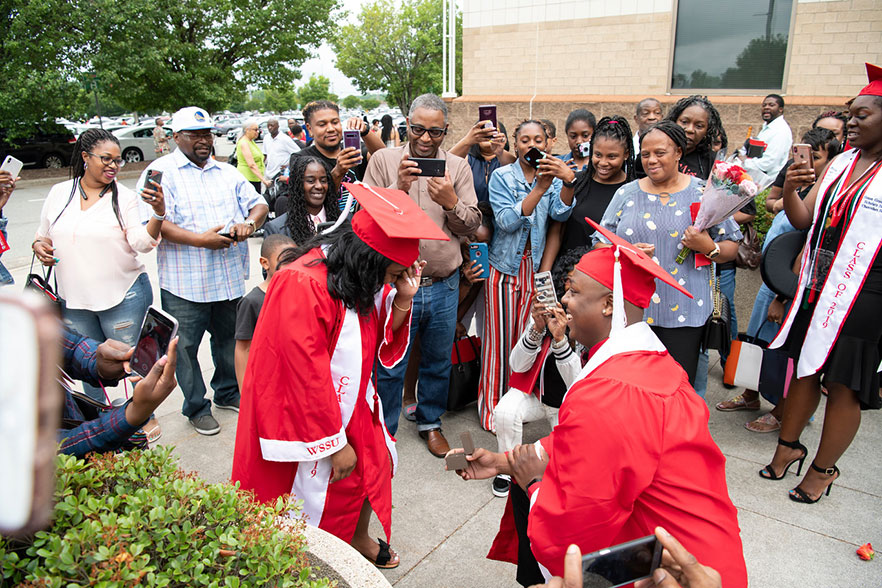 Collin Spratt-Wilks proposes to Valarie Gaines with their families there to capture the moment just outside the LJVM Coliseum.


Dr. Stephanie Dance-Barnes, associate professor of cell and molecular biology at WSSU, has mentored dozens of students in her cancer research lab since joining the university in 2010. And through the Women in Science Program (WISP) she developed,  hundreds of female high school and college students have been inspired to pursue careers in STEM. During the ceremony, she was recognized for her work, receiving the 2019 Board of Governors Award for Excellence in Teaching, which recognizes the extraordinary contributions of faculty members across the University of North Carolina System. 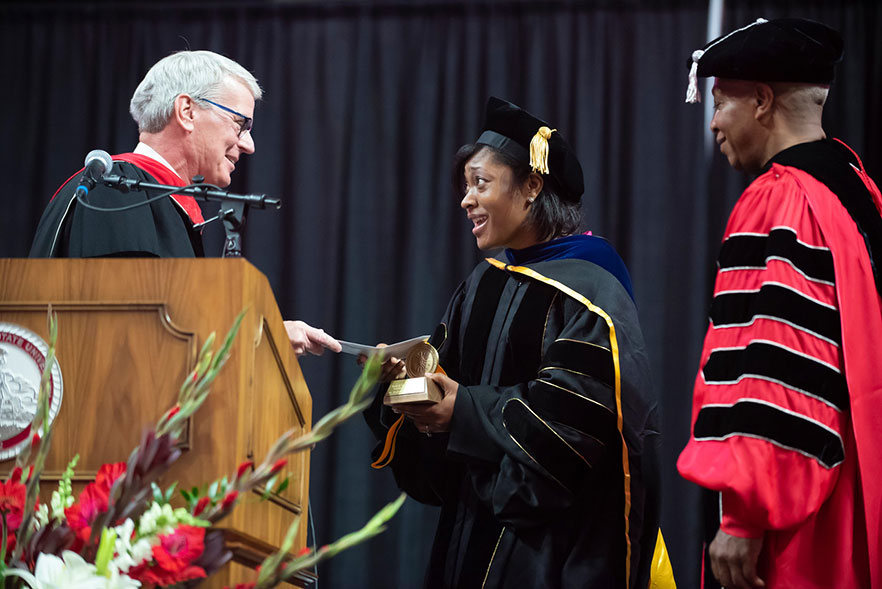 David Powers, a member of the University of North Carolina Board of Governors, presents award to Dr. Stephanie Dance-Barnes. Chancellor Elwood L. Robinson stands nearby. 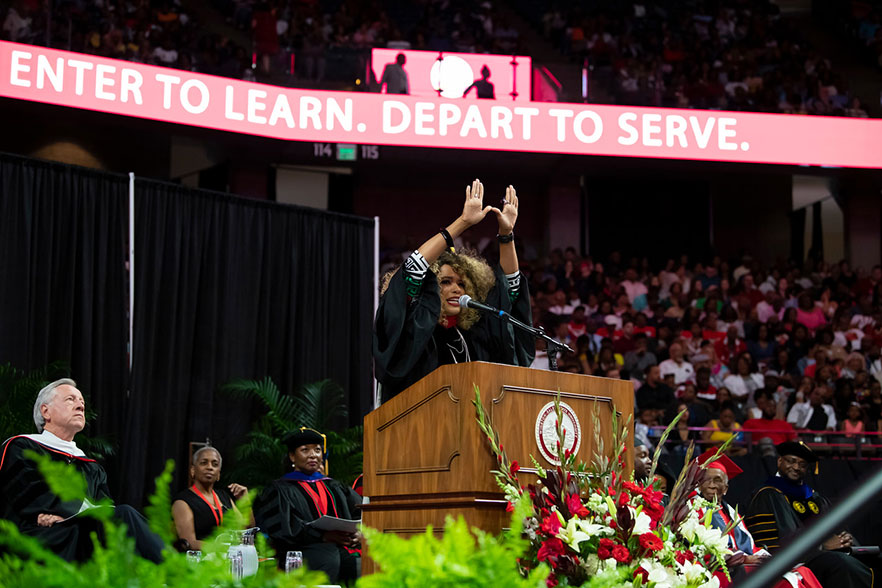 Kwanza Jones delivers her address to the class of 2019.

Tavoria and Taneshia Poole are more than just siblings, they are best friends. During the ceremony, they walked side by side on the stage to accept their Bachelor of Science in Nursing degrees. The sisters, from Jacksonville, are the oldest of seven children and the first in their family to graduate from college. At the end of the program, Tavoria Poole was commissioned on stage as a lieutenant in the U.S. Army Nurse Corps. This fall, she’ll be stationed at Walter Reed Army Medical Center in Maryland. 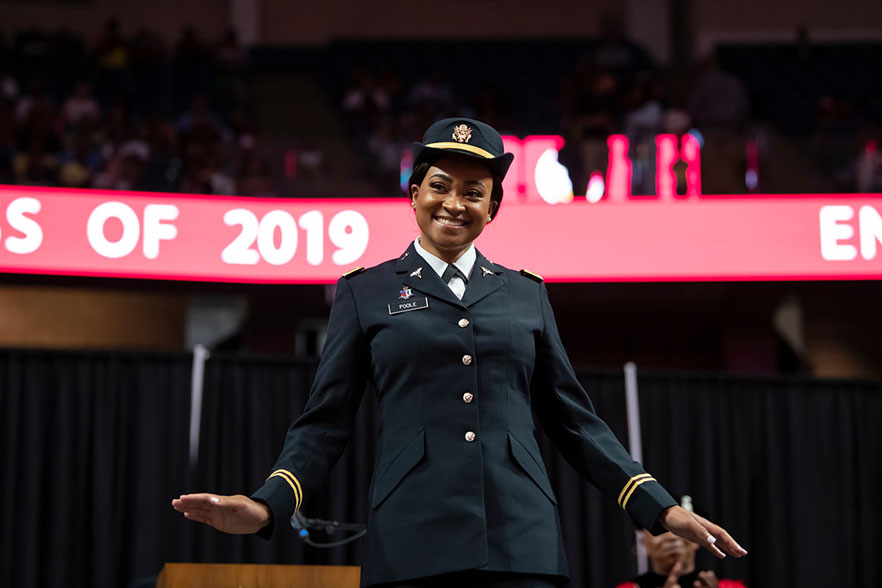 Lt. Tavoria Poole, who graduated with her sister from WSSU, was commissioned during the ceremony.

From colorfully decorated mortarboards, to on-stage dances and creative fashion, the Class of 2019 showed their personality at the ceremony.

One standout Friday was basketball All-American William Crandell, wearing sunglasses and red pants, his stage performance included shoulder shimmy as he tossed rose petals into the air. Crandell, a business administration major from Bethel, wrote on his Twitter page that the flowers symbolized how "I ROSE to the top.” Crandell said he graduated from WSSU debt-free. This fall, he'll attend the University of North Carolina at Greensboro (UNCG) to pursue a Master of Business Administration (MBA) on a full academic scholarship. 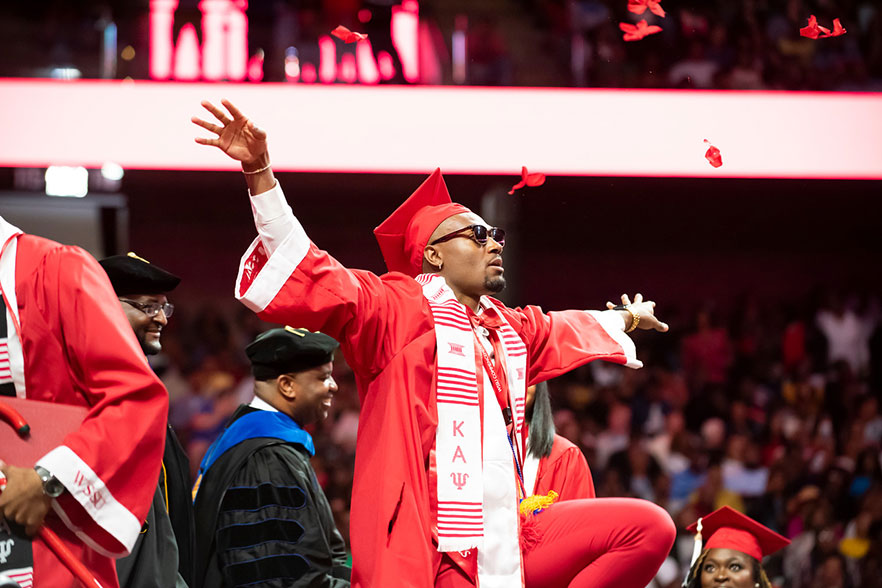 4. A Song of Freedom

The second number, "I Believe God," showcased the talents of graduate Nia Lewis. In her finale as a WSSU student, Lewis performed a solo with the choir. Lewis, a music business major from Accokeek, Maryland, received standing ovation from her fellow classmates as she belted out her final note, which lasted for 12 seconds. 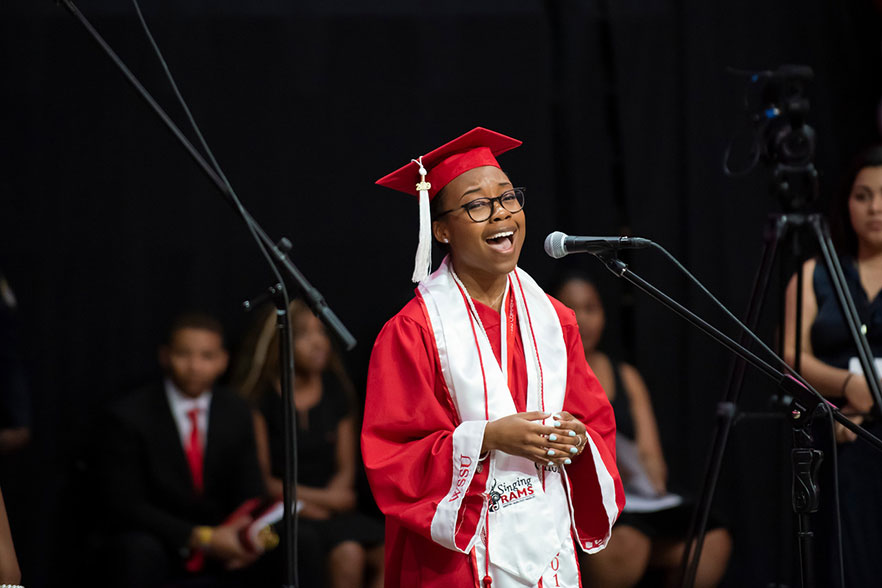 Nia Lewis, a music major, performs her final solo as a member of The Singing Rams during commencement.

Last year, two graduating Red Sea of Sound drum majors became a sensation when a video of them on stage went viral. This year, Greg Hughes, a graduating drum major from Fayetteville, had his own incredible on-stage show, with kicks, splits and a dip. 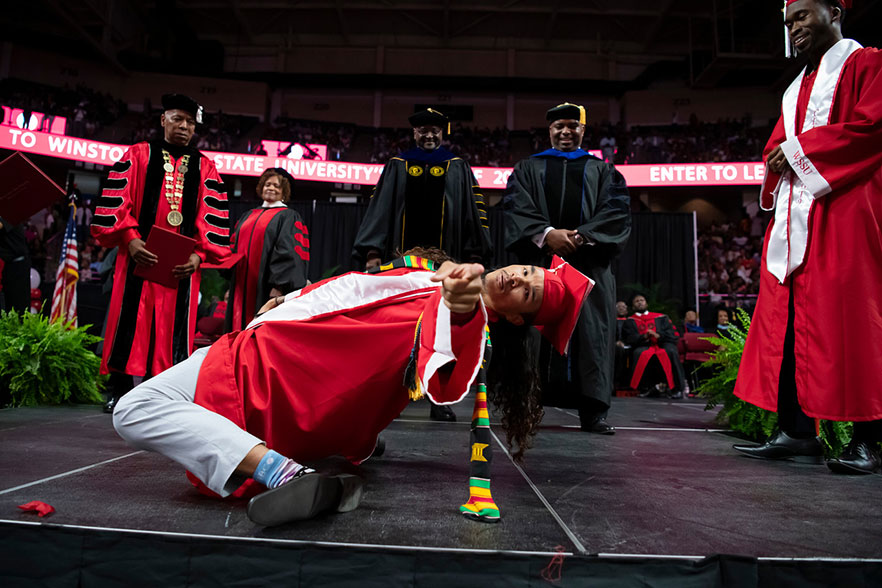 Greg Hughes, a graduating drum major from the Red Sea of Sound marching band does a bend on stage before receiving his degree in computer science.

As the daughter of a WSSU faculty member, Tanya Zubov practically grew up on campus. After she walked off the stage with her degree in hand, her mother – Dr. Lynn Zubov, associate professor in the Department of Education, sitting nearby in the faculty section – was there to give her a big congratulatory hug. 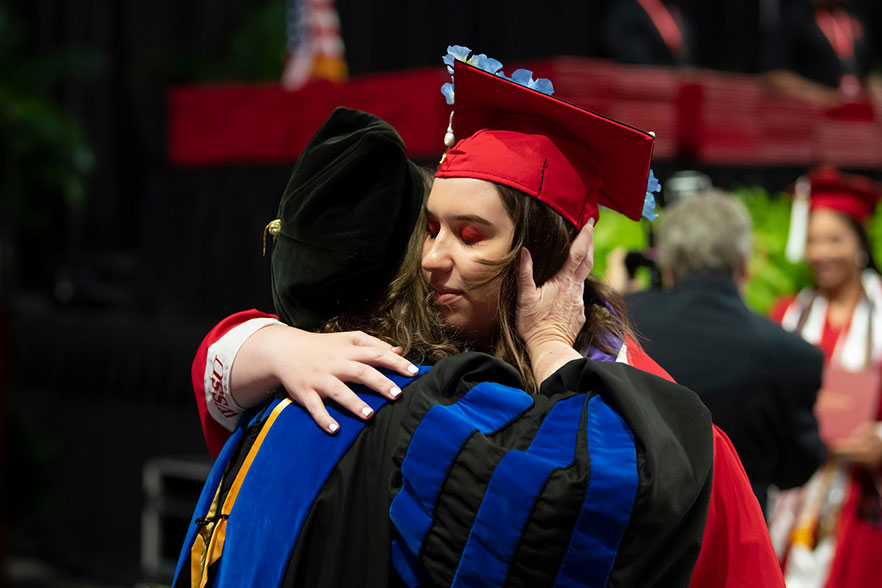 1. A Graduation 70 Years in the Making

Once you’re a Ram, you’re a Ram for life. Elizabeth Barker Johnson, a 99-year-old World War II veteran and retired school teacher, embodied this spirit on Friday as she finally got her chance to walk on stage to receive her degree from WSSU.

Johnson, a member of the famed 6888th, the only all-female, all-African-American Army Corp battalion stationed overseas during the war and a member of the class of 1949, received a standing ovation from the audience of 12,000 at the coliseum as she walked to the podium to accept a Bachelor of Science in Special Education from Chancellor Elwood L. Robinson.

Johnson’s story also captured the eye of local and national media, who were at the coliseum to capture the moment. On Saturday, NBC’s “Today” included a segment from NBC correspondent Tammy Leitner that was filmed at commencement. She was surprised with the news that she'd be attending the ceremony on her 99th birthday on May 2. 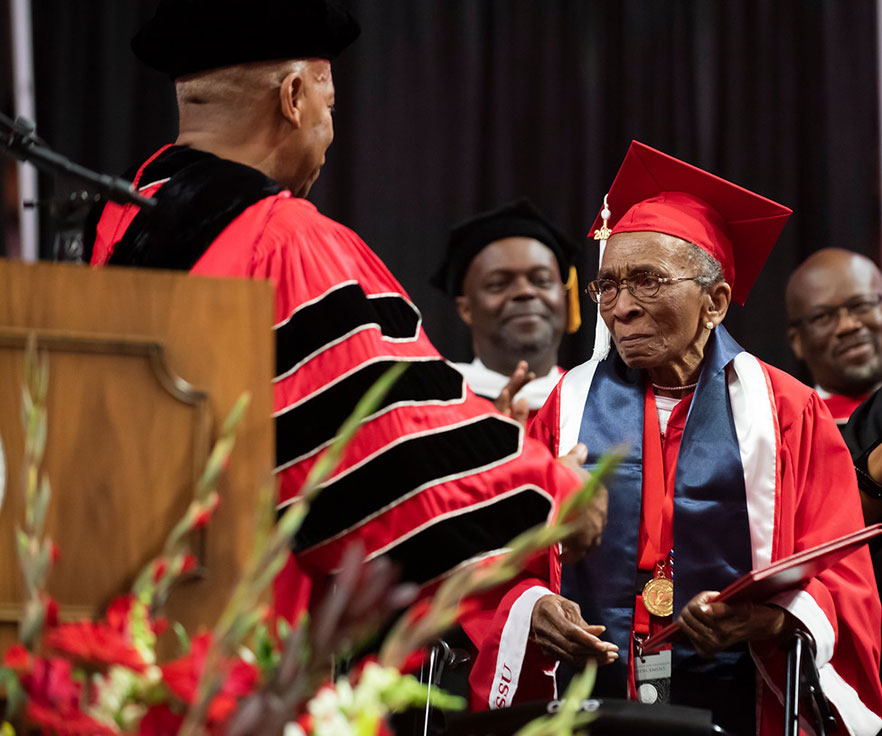