Through the Million Dollar Match, all gifts received or pledged between now and Dec. 31, 2019, for need-based endowed scholarships will be matched dollar-for-dollar.

WSSU Chancellor Elwood L. Robinson said only a few HBCUs have launched this type of matching fund-raiser at this scope, with a goal of raising $2 million for need-based scholarships.

"There is a tremendous need for financial aid resources to make Winston-Salem State University a reality for students and families,” Robinson said. “This generous offer by a Winston-Salem couple to provide up to $1 million in matching funds challenges our alumni, students, faculty, staff and friends to take on a major role in helping our community meet the goal of making the university financially accessible to more students."

There was a soft launch for the fundraiser in late February during an alumni event at the CIAA Basketball Tournament in Charlotte. Since that time, more than $260,000 has been pledged or contributed toward the $1 million goal.

The initiative will launch publicly on Saturday, Sept. 14, with information tables at WSSU’s football home opener at Bowman Gray Stadium. 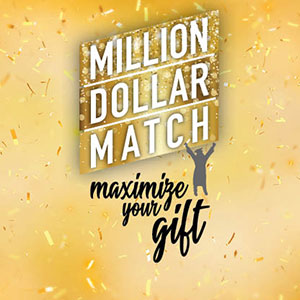 “If you’ve ever thought about establishing an endowed scholarship, adding to your existing endowed scholarship or giving back to WSSU students, now is a great time because every dollar that is donated – up to $1 million – will be matched,” Afolayan said.

To qualify for the Million Dollar Match, donors may:

The initiative is designed to enhance giving among WSSU’s more than 28,000 alumni, she said. Contributions during Homecoming 2019, including class reunion gifts, will qualify for the match.

Before the end of the year, WSSU also will be looking to enhance the initiative through a series of outreach events that target the entire university community, including Homecoming during the week of Oct. 27, and WSSU Giving Tuesday on Dec. 3.

A second goal of the initiative is to nearly double the number of endowed scholarships at WSSU from 125 to 200.

Donors can choose the name of the need-based scholarship as well as the program they’d like to support.

Are You Up for the Challenge?

WSSU is nationally recognized for its commitment to graduating students and placing them in high-paying jobs and is one of only five universities in the nation that has consistently ranked among the top 20 schools on the Social Mobility Index (SMI) over the past five years.

WSSU serves a high percentage of underserved students who face unforeseen personal and financial circumstances that may hinder their ability to complete their education.

Last fall, nearly three-quarters of students received federal student loans, and 65% received Pell, a need-based grant. Even with this support, many WSSU students must discontinue their studies because the aid they receive isn’t enough.

Last fall, after applying loans and grants, nearly 300 WSSU students still had a deficit of more than $200, with an average deficit more than $3,200. By increasing the number of need-based scholarships, which typically range from $1,000 to $1,500, Afolayan said, WSSU can help even more students succeed.

“We’ve seen the kind of success these scholarships can have on our students,” she said. “During the 2016-17 academic year, of the 167 students who received need-based scholarships, 165 – that’s 99% – continued their education or graduated.”