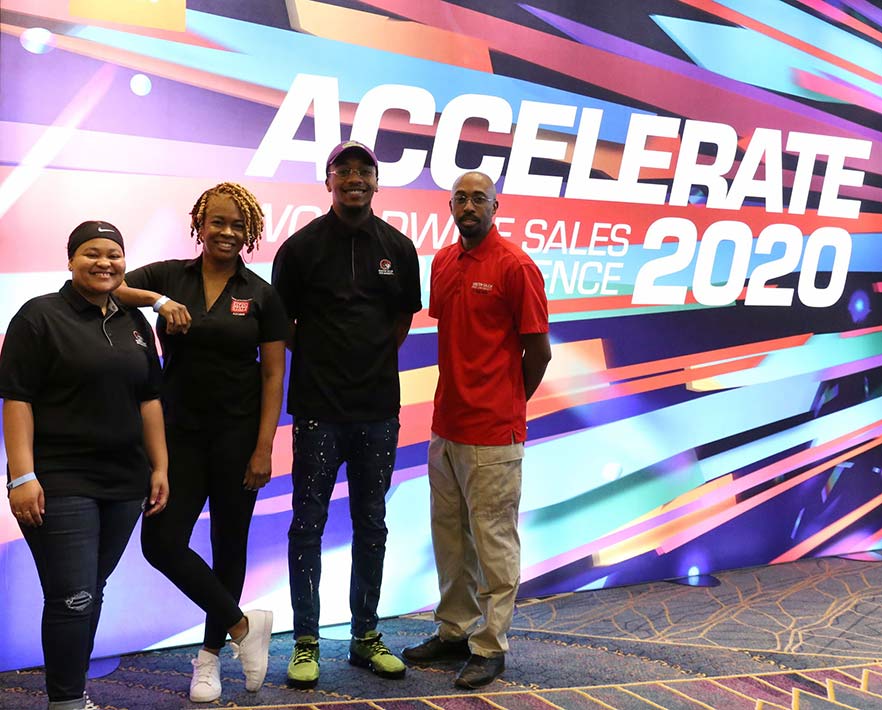 Two Winston-Salem State University students had the experience of a lifetime last month when they were selected to participate in the Adobe World Sales Conference 2020 in Las Vegas. Antoinique White, a mass communications major, and Igee Yorker, a psychology major, were among a group of students from four universities who participated in the experience Dec. 14-17.

The students, along with their WSSU staff mentors Chelii Broussard, assistant director of student activities, and James Russell, media production lab manager, flexed their Adobe skills by producing recap videos, infographics, and other multimedia content in real-time throughout the event. Participation also allowed Yorker and White to network with some of the more than 10,000 conference attendees, including top executives. The students were exposed to high-caliber, professional video production, digital strategy, graphic design and illustration, and more throughout the experience.

See examples of the students' work

“Participating was incredible,” said Yorker. “To have this opportunity to do this kind of work in this setting was amazing. I have learned so much that I know will be applicable to my future.”

Upon their arrival in Las Vegas, Yorker said they were able to explore the city before jumping into real-time video coverage of keynote speeches and breakout sessions. The students then retreated to a “war room” to edit the footage, create graphics, and produce multimedia assets—many of which were used the next day during keynote and other presentations. More than a thousand photos were taken and hours of film were shot and edited by the students.

“This is probably one of the best examples of high impact practice instruction in action because it was hands-on, real, industry-driven digital projects that Antoinique and Igee helped to design,” said Wanda White, director of WSSU’s Center for Innovative and Transformative Instruction (CITI).

WSSU was the only the HBCU selected to participate in the experience. The other selected schools included UNC-Chapel Hill, University of Alabama, and University of New Mexico.

“Being from an HBCU and coming to this conference, I come from a different mindset and a different background,” said Antoinique White. “I am an African-American woman. I hope to let people know that people who look like me are interested in this side of production and creativity.”

Adobe is a Fortune 500 company with revenues topping $9 billion in 2018. In 2018, WSSU became the first historically Black college or university (HBCU) to become an Adobe Creative Cloud (Adobe CC) Campus. Through the partnership, WSSU students, faculty and staff with a registered university email address have access to Adobe CC favorites such as Photoshop CC, Illustrator CC, InDesign CC, Adobe XD CC, and Spark. WSSU began offering Adobe CC as part of a digital literacy initiative designed to expose students to technology used by more than 90 percent of the world’s creative professionals.