When Tristen Johnson graduated from Winston-Salem State University in 2016 with a degree in economics and finance, he headed to graduate school.

Along the way, his career took a sharp, unexpected turn and today he’s a first lieutenant in the newly minted United States Space Force. And he could not be happier or more enthusiastic about his future.

“This is very exciting. The potential for the Space Force is limitless, and being new, they are open to change,” said the 26-year-old Johnson. “I see my future in space; I want to continue this career.”

Johnson, who attended WSSU on a full Chancellor’s Scholarship, totally expected to continue his education when he left WSSU, and actually spent a year in Clemson University’s engineering program. But along the way, he decided the Air Force offered great career opportunities and by the summer of 2018 he was in officer training school.

He graduated as a second lieutenant and immediately became a combat systems officer. Johnson quickly realized that was not a good fit.

“I was basically going to be like the navigator or weapons operator for the pilot. I got to the point of beginning training and realized that wasn’t what I wanted to do,” Johnson explained. “I was able to express myself, my wants and desires.”

Johnson made his case before a board hearing and it resulted in a change, a change to program manager. “My economics and finance background helped them with that decision.”

Johnson was transferred to Hanscom Air Force Base outside of Boston and he settled into what he figured was a career in the Air Force. Along the way was promoted to first lieutenant. Then President Donald Trump announced the formation of the United States Space Force.

“I was immediately intrigued,” said Johnson. “I had already seen the commercialization of space with SpaceX, Virgin Galactic, and Blue Origin. I saw it was a new rising sector that I wanted to be a part of.”

Johnson’s move to the new organization went smoothly, basically an inter-service transfer. Applications opened in March of 2020 and by early last fall he was notified he had been accepted. On February 1 of this year he was commissioned into the United States Space Force.

It should be noted Johnson will not be traveling into space; his job title remains the same as it was in the Air Force, and actually for the time being he is still working on an Air Force project.

“What I’m doing now specifically for the Air Force is to avoid disruption of services. They didn’t want to move people immediately. It’s the same project, with space, with surveillance and intelligence,” said Johnson, noting because of the sensitivity of his work, he could not be more specific about his job.

By the end of the year, he will move from Hanscom Air Force Base to a Space Force base and expects to be doing a job very similar to the one he’s tasked with now.

Johnson laughingly admits he has been the butt of more than one Space Force joke from family and friends, but says he quickly explains to them need for the organization.

“There are a lot of jokes. There’s a lot of confusion from family and friends. A lot of people didn’t see the need or the reason,” said Johnson. “I guess the good thing about having friends and family that can see the fun side, they can be educated. I have been able to show them the need for this, the need for intelligence and how other countries are gaining an edge (in space), and the need is greater than ever.”

There is one thing Johnson is certain of: his four years at WSSU paved the way for his career in this new and challenging arena.

“Winston-Salem State prepared me well. It made me a more well-rounded individual, especially in dealing with a diverse group of people like in the military,” said Johnson. “Organizations like my fraternity and even being part of the student investment team and interacting with different people from around the country improved my ability and my confidence to articulate myself. I can speak to a small group or much larger groups or speaking to friends or giving briefs to high-ranking officials.

“I have such fond memories of experiencing the Winston-Salem State culture and developing those life-long friendships. It’s something special.” 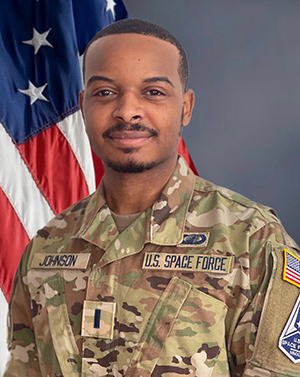