When Martasia Thompson walked across the stage at Winston-Salem State University’s graduation last May, she was prepared to walk into a career. And she did.

After outshining more than 125 other interns at Reynolds American last summer, she recently began a job as the territory marketing manager in the Southern Orlando area for the company.

“I really believe that thinking outside the box helped me standout in my class (of interns). There were about 130 people in the class, and I wanted to make them want to hire me,” said Thompson.

Two key factors led to her eye-catching performance during her internship, Thompson said. The first: Winston-Salem State University had prepared her well. The second: she was well-versed in the Adobe Creative Cloud program at WSSU and had gained confidence and poise while serving as an Adobe influencer on campus.

“When I first toured the Winston-Salem State campus, I really felt that home vibe. It felt very inclusive and welcoming,” said Thompson, who is from Concord.

Once she enrolled, she knew she had nailed it with her first impression. The university and its faculty nurtured her, challenged her, and helped her become an outstanding student. 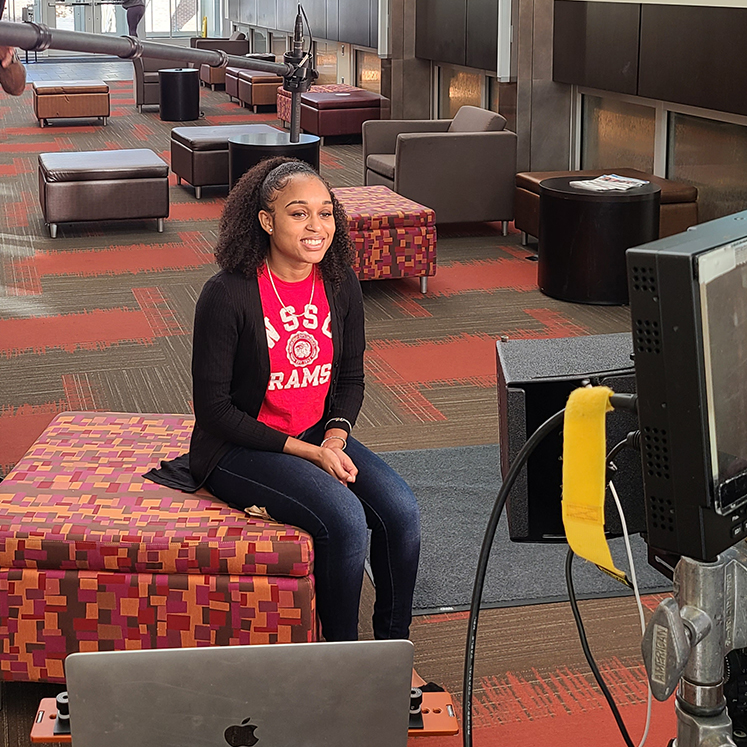 When she visited a fair put on by campus organizations early in her freshman year, she was impressed by the National Association of Black Accountants. At the time she was unsure about a major, but that group helped her make a decision, at least a preliminary one.

“The group that stood out to me that day was the National Association of Black Accountants. They mentioned professionalism and carrying yourself. I joined that group, and I was inspired to start taking finance courses and that led me to business.”

Though she came to campus undecided about a major, she quickly discovered she was quite good at the business curriculum, but … “I was just not that passionate about it.”

With a little research she discovered the marketing program. Not only was she proficient in the curriculum she was passionate about it.

“I found out I loved marketing. I could be creative and still use the analytic part of my mind,” said Thompson.

And then, in the summer before her junior year, opportunity came knocking again. WSSU is an Adobe Creative Campus, meaning all students and staff members are given access to Adobe Creative Cloud programs. Thompson was aware of that Adobe presence and used some of its products.

Adobe was looking for someone with recognizability and reach on the WSSU campus to serve as an Adobe Ambassador. Thompson was the perfect candidate and they offered her the opportunity.

“I told them I wasn’t that savvy with Adobe. They said the goal wasn’t to be super Adobe savvy, that they were looking for a student with a lot of connections to spread the word and make students aware of the products.”

Thompson basically became Adobe’s on-campus influencer, but it was quite a bit more involved than posting flashy photos on social media.

“It was a combination of influencer and instructor and like a salesman as well,” said Thompson who easily handled a full class load and served as an Adobe Ambassador her final year as an undergraduate at WSSU. “I wanted to shake the whole campus and say, ‘you have this for free.’ I was trying to get the staff to buy in and get professors involved.

“My first major lesson was to stay accountable. I think within the (Adobe) program there were plans to make a plan, but you had to follow through. You have to realize everyone isn’t going to understand, that you have to sit back and learn how to be more impactful.”

She spent the final two years at WSSU spreading the Adobe word through virtual workshops and classes, lots of Zoom calls and more traditional social media.

“My job was to make it (Adobe) applicable to all different majors, finding ways to make these products work across the board,” said Thompson. “I was given the freedom to promote it anyway I wanted to promote it.”

And while she was teaching and influencing others in her role, she was also learning volumes herself, mostly about herself.

“I met a lot of Adobe employees and ambassadors and they challenged me to think outside of the box,” said Thompson. “The experience had a dramatic impact on me. I remember my first Zoom with a class, and I remember how nervous I was. That all made me want to be more comfortable in these situations.”

Winston groomed me professionally, it groomed me personally. It was super formative and transformative. I had a lot of real-world experiences there. It wasn’t only what I was doing in the classroom, it was a well-rounded experience that helped me.