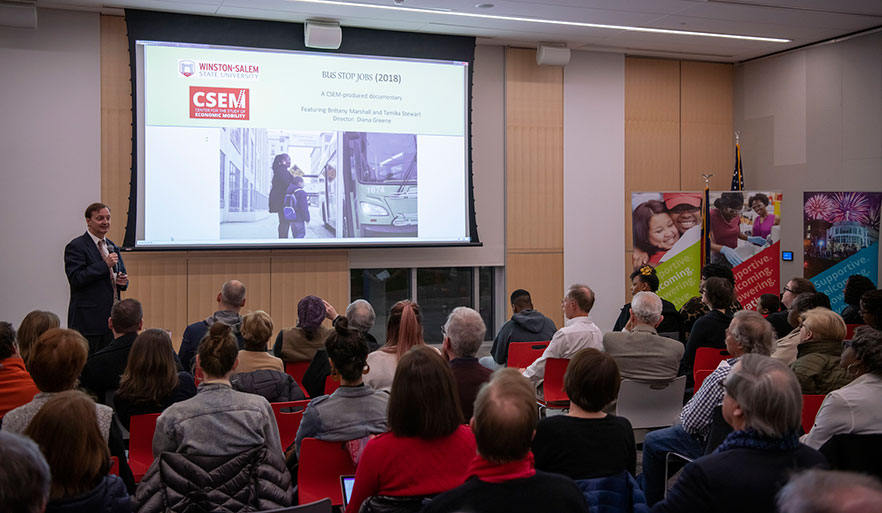 Dr. Craig Richardson, founding director of WSSU's Center for the Study of Economic Mobility, presents survey results during an event at the Forsyth County Central Library on Jan. 30.

A new report from Winston-Salem State University’s (WSSU) Center for the Study of Economic Mobility (CSEM) is providing a glimpse into the struggles facing employed Winston-Salem residents who rely on public transportation.

Dr. Craig Richardson, founding director of the CSEM and an economics professor at WSSU, said the survey is the first to document the opportunity costs of long bus commutes for employed Winston-Salem Transit Authority (WSTA) bus riders.

“Our public bus system remains a valuable asset for residents of the city, but challenges of moving people across low density suburban areas calls for us to think about innovative solutions that potentially link or complement the existing fixed bus routes,” said Richardson, who led the survey. “We think private business, nonprofits and government can potentially work together to lower commute times for those unable to afford a vehicle. Time is the most valuable commodity, especially for those at the bottom of the economic ladder.”

The survey of 215 employed Winston-Salem Transit Authority bus riders, conducted by Winston-Salem State University’s Center for the Study of Economic Mobility, finds that:

The results were presented at “What Bus Riders Tell Us About Their Lives, Choices and Missed Opportunities,” an event sponsored by CSEM and held at the Forsyth County Central Library on Wednesday, Jan. 30. The event also included presentations and new research on Forsyth County economic mobility from Dr. Zagros Madjd-Sadjadi, professor of economics; and Dr. Russell Smith, professor of geography. Both are CSEM Faculty Fellows.

The survey, which included more than 50 questions, was conducted by T.L. Burton and Associates, a private contracting firm, under the guidance of CSEM.  Input was received from WSSU faculty and staff, and researchers from Wake Forest University, Forsyth Futures and the Winston-Salem Foundation.

The event also included a screening of “Bus Stop Jobs,” an 11-minute documentary that shows a day in the life of Brittany Marshall, a single mom and resident of East Winston who relies on public transportation to get to and from her job in downtown Winston-Salem.

About CSEM
Founded in September 2017, WSSU's CSEM serves as a hub for faculty research, undergraduate student research, scholarship and community outreach. CSEM is funded through a $3 million grant from the Thurgood Marshall College Fund’s Center for Advancing Opportunity.

According to a 2015 study by economist Raj Chetty, children from low-income families in Forsyth County are less likely to move up the income ladder as adults compared to kids almost anywhere else in the United States. Only two counties in South Dakota are worse. For more information, visit www.wssu.edu/csem.

URL: Center for the Study of Economic Mobility
Media Contact