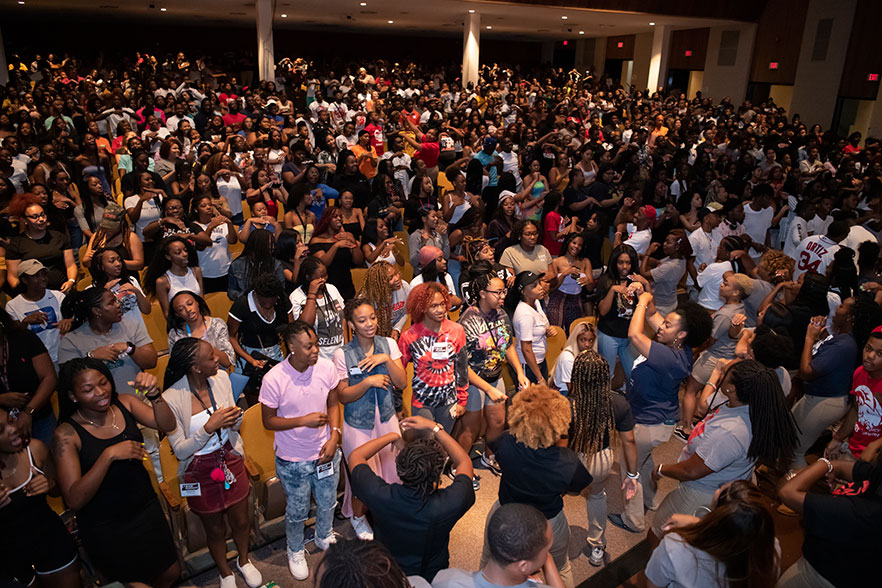 The class of 2023, the largest freshman class since 2008, fills K.R. Williams Auditorium at a morning session for Ramdition, WSSU's weeklong orientation for first-time freshmen and transfer students.

Freshman Vontarya McBride first decided she wanted to attend Winston-Salem State University (WSSU) after she discovered the university on YouTube when she was 14.

Freshman James Parker, a graduate of E.E Smith High School in Fayetteville, says he knew WSSU was the place for him after a visit to campus the summer before his freshman year of high school. 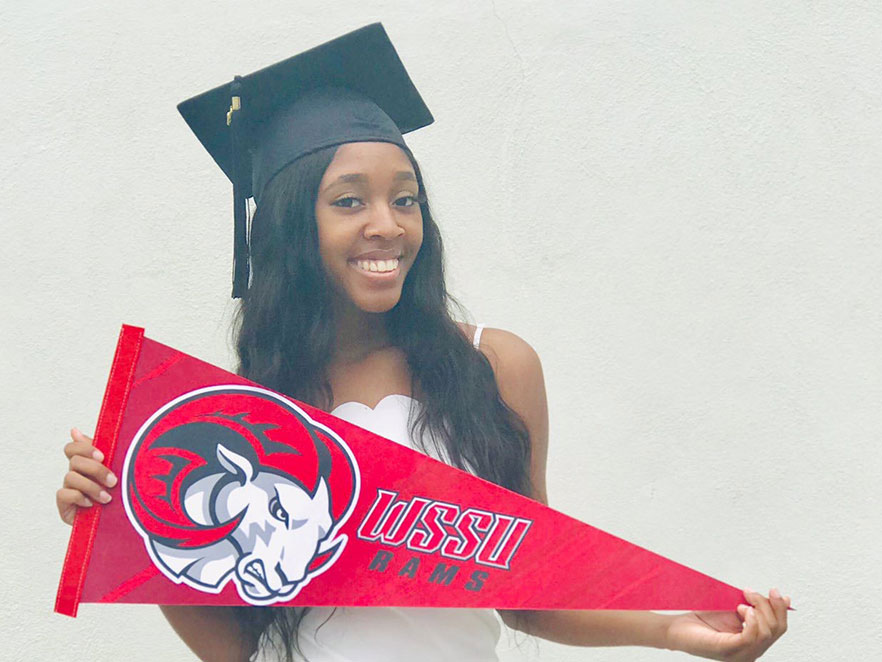 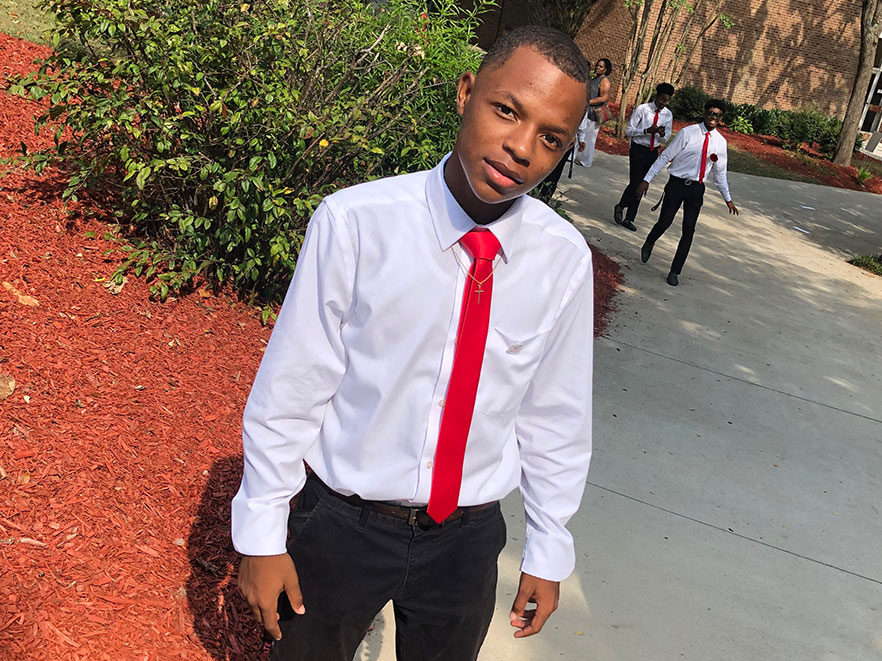 According to a recent survey, these students’ testimonials are not uncommon.

The Cooperative Institutional Research Program (CIRP) Freshman Survey also found that only 9% of WSSU freshmen said the university was third or less choice for them, down from 21% in 2014. The 2018 national public university average was 21%.

The survey – through the Higher Education Research Institute at the University of California, Los Angeles – provides a snapshot of what incoming students are like before they experience college. More than 80% of WSSU 2018 freshmen took the survey during Ramdition, WSSU’s weeklong orientation.

Jaime Hunt, WSSU’s vice chancellor of strategic communications, says Chancellor Elwood L. Robinson, who arrived at WSSU in January 2015, has helped cultivate a welcoming environment that is easy to market.

“Thanks to the support of our visionary chancellor, we have worked hard to tell the WSSU story and to share the benefits of the HBCU experience,” Hunt says. “WSSU students are among the best and brightest anywhere. Our faculty and staff are dedicated to student success, and there’s an outstanding vision for the future. Now that more prospective students understand our story, we are seeing that we are a first choice institution.”

In 2016, WSSU rolled out a new visual identify and updated its brand messaging. Hunt says communications on campus also have been centralized to focus on strategic, data-driven campaigns to create action and change perceptions, prioritizing projects that speak specifically to areas in focus groups and in surveys.

According to the survey, WSSU freshmen ranked these four factors “very important” to them in choosing a college or university:

As a comparison, the survey found the top factor among public university students nationwide was the cost of attending, at 57.5%.

McBride, the valedictorian at Anson County Early College, says she knows why WSSU has become a first choice institution.

“I believe that this is the case because WSSU has a welcoming environment,” the mass communications major says. “After seeing how everyone considered each other family, or Ramily, I decided that this was the school for me because I knew that I wanted to be in a welcoming, family-oriented environment if I was going to be away from my biological family for so long.”

Baker, a nursing pre-major, says becoming a Ram means the world to her.

“I have become part of a family away from home, and I am one step closer to reaching my goal with an amazing educational support system behind me,” she says.

Parker – a member of marching band, the student government association and the National Honor Society in high school – says the word is out about WSSU.

“People are becoming more aware of what the school has to offer, and they are falling in love with the campus,” Parker says. “I feel like my decision was the best decision. There is no other university that is for me other than THE Winston-Salem State University. I am proud to be Winston Man.” 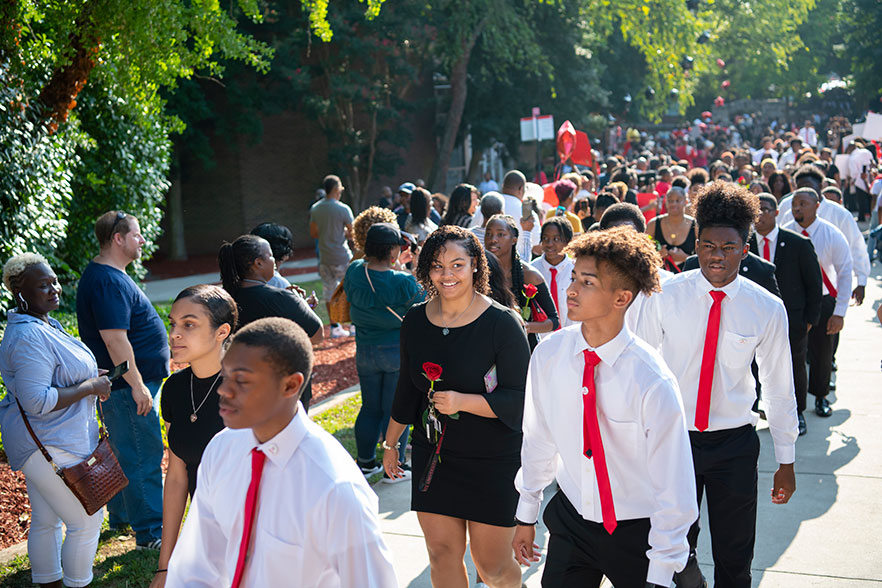 With families and alumni cheering them on, WSSU's class of 2023 participates in the Ram Walk, the culmination of Ramdition, a weeklong orientation.
Tags: Faculty-Staff, Media, Features, Health Sciences, Campus Life, Honors and Rankings, Alumni, The College